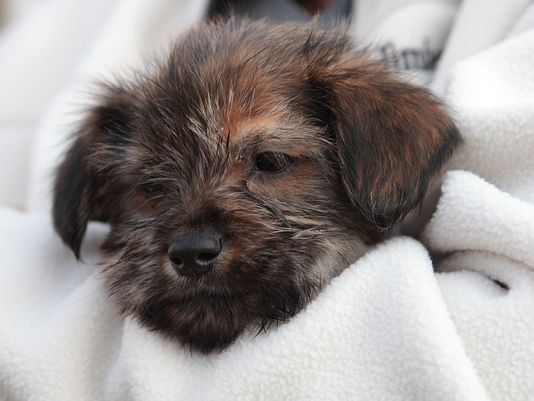 In February a puppy’s life was saved when an Indiana garbage man noticed one of the bags he was tossing into the truck move. Now the woman responsible for tossing the puppy has been convicted of animal cruelty and will be serve 180 days in jail.

Garbage collector Mike Upchurch is the one responsible for saving the puppy’s life. He was throwing trash into his truck when he heard a whimpering. Upchurch investigated the bags and found a shivering puppy covered in garbage in one of them. He quickly rushed the puppy into the truck’s cab to warm it up.

The puppy was starving, cold and dirty, but has since made a full recovery and is now living with his rescuer. Upchurch named the puppy Garby.

Shemika T. Robinson has been convicted of animal cruelty for throwing Garby in the trash. She is banned from owning any animals in the future and will serve 180 days in jail. Once released from jail she is required to complete 50 hours of community service at the Muncie Animal Shelter.