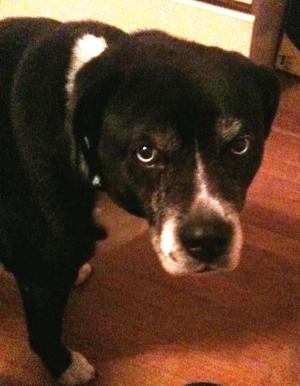 A six-year-old Labrador mix named Panzer is being kept in an unidentified location to protect him from a former abusive owner.  He is the first dog in Massachusetts to be recognized under a restraining order for domestic violence.

In August, Governor Deval Patrick signed a large bill called “An Act Further Regulating Animal Control.”  A smaller section of the law stipulates that possession of an animal may be awarded to a victim to “prohibit the accused from abusing, threatening or taking a pet.”  Previously, a judge could only mandate that the accused stay away from the victim and their child(ren).

A Plymouth County judge embraced the new law and included Panzer in the order against his owner’s boyfriend.

“In an ideal world, we wouldn’t need it,” said Kara Holmquist, Director of Advocacy for the MSPCA.  “But it’s good that judges are becoming aware of it.”

Research has indicated that over 70 percent of abused women say their abusers have threatened to harm or kill their pets.  Nearly 50 percent of victims put off leaving abusive and dangerous situations for fear of what might happen to pets that get left behind.

“Leaving a pet behind is not an option,” Holmquist said.  “It’s about animals and their safety and removing the barrier so people can feel the pet is protected in a situation.”

Panzer is currently staying in a foster home while his mother and her young son stay at an out-of-state domestic violence shelter.

“It is hoped that [the judge’s] order for the inclusion of Panzer in [this] Restraining Order has set a precedent and that moving forward we will see a lot more of these Abuse Protection Orders,” said Marshfield Animal Control Officer Demi Goldman.

Hopefully this law will gain favor and be passed in other states.  Perhaps then domestic violence shelters might also open their hearts a little more to allow animals to stay with and be just as well-protected as their owners who were brave enough to leave and seek help.