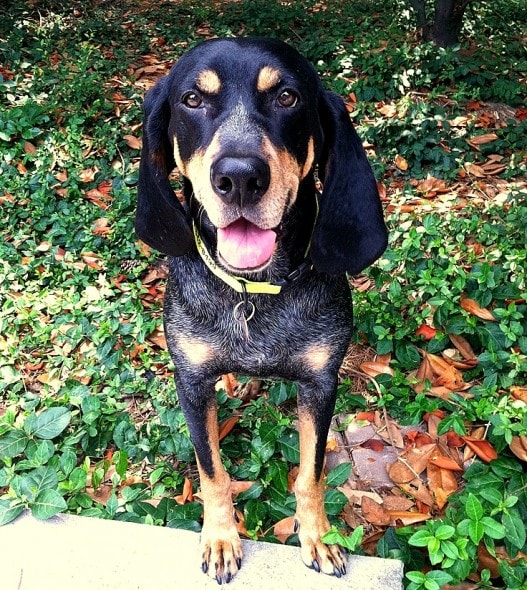 After months of deep depression, my dog put me back together.

Having battled depression for the past ten years, I am very excited by the notion that I have not had a breakdown or episode in about four months. This progress is very likely correlated with the fact that every day for the past two months has started the same for me, with a cold nose in my armpit about 10 minutes before my alarm, 2 minutes of belly rubs, a very involved breakfast and quick bathroom trip to the dog run. Two months ago, I adopted Blue, a two-year-old bluetick coonhound from a local rescue. This addition was after months of preparation, cost analysis, and downgrading to a much older (but pet-friendly) home. I had been in a very deep hole for months; it was affecting my career, my relationship, and my overall health. I had lost passion for everything in my life. I had contemplated leaving my boyfriend of 8 years, quitting my job, running away, because nothing in my life made me happy. I spent most of my nights crying in the bathroom or on the stairs so that no one would realize how empty I was. I was unable to love; my boyfriend, my job, even my family. It felt as if my heart had turned off. When I suggested maybe a dog would help, my patient man complied, likely because he saw no other path.

I knew I wanted a hound dog though I have never owned one, or even a large dog in general. However, I wanted a dog I could run with, one that would be good with my very young niece and nephews, and (though I wouldn’t say it aloud) one that was big enough to hug. After searching online, I stumbled across American Black and Tan Coonhound Rescue. After stalking their website for months, I found the perfect dog! He was a five-year-old black and tan who loved to cuddle and loved outdoor activities but wasn’t too rambunctious. When I went to the shelter to meet him, to my dismay, he had already been adopted. The volunteers brought out a number of dogs none of which I really clicked with. The volunteer told me they had a bluetick I could look at to which I replied, “I’m not a huge fan of their coloring, but I guess.” The volunteer brought in a little (for his breed) boy who wouldn’t take a treat from me but as the volunteer left, jumped on the chair I was sitting in. I took it as a sign and as I spent more time with him, I knew he was the one. Blue had scars on his face above his eyebrow and on his snout; he had been adopted and given back at least twice. He was broken, and that’s ok, because so was I.

Fast forward two months, thousands of dollars in vet, food, and training bills, and several dinners snatched off the table later, I am beginning to feel whole again. Even when I want to pull my hair out at his stubbornness, I am smiling, because every minute aspect of him being in my life improves it.

Just existing, dogs reduce loneliness.  According to a study by Johns Hopkins, quiet time with a dog made was able to reduce loneliness in senior citizens, even more than visiting with other people. There is a certain comfort to knowing a dog is in the room. There is some relief for me from knowing my dog is in the room. If I’m getting overwhelmed or stressed, I talk to him. I tell him what I have to do or what I am worried about or how frustrated I am with whatever random occurrence bothers me that day, which is soothing because I’ve never felt comfortable opening up to people.

Dogs love you unconditionally.  I am strange, and broken, and I do not know how to open up or talk to people. I don’t know how to make friends. Blue doesn’t care. “With a pet, you can just feel,” according to Teri Wright, Ph.D., “You don’t have to worry about hurting your pet’s feelings or getting the advice you don’t want.” I can call him a walking fart machine or tell him that want to throw him in the garbage after he chews up my favorite set of plates. Of course, I love him and smile while I am saying these things and he doesn’t care either way. I can say what I want, be who I want; Blue loves me regardless.

Dogs alter our behavior.  When my depression gets particularly intense, I cannot even leave my bed. This is no longer an option. I have to feed Blue and take him out to potty. No matter how low I am, I know that he needs me so I cannot forsake this responsibility. When I come home exhausted from work and want to curl up on the couch with a blanket, Blue still needs a walk. He forces me to get out of the house and exercise, increasing my endorphins. I have never been a responsible adult, but budgeting for Blue and ensuring he get proper care changed things. According to Ian Cook, MD, “Taking care of a pet can help give you a sense of your own value and importance.”

Dogs are good for your general health.  Bringing a dog into your life can lower blood pressure, reduce cortisol (stress hormones), and boost levels of oxytocin (love chemicals in the brain). According to one study dog owners exercised more often, slept better, reported better fitness levels and fewer sick days, and saw their doctors less often than people without dogs. Though I cannot say that this is true for all dog owners, I see myself preparing for all sorts of outdoor activities this summer with Blue. I spend fewer weekends with Netflix, and more time exploring outdoor cafes for brunch with my furry companion. My life revolves around this 50-pound ball of fur. I love him more deeply that I have felt for anything in my adulthood.

Adopt a Rescue Dog Today.  In the two months since I adopted Blue, he has gone from being skittish and endlessly trying to run away, to my (sometimes mischevious) shadow. He has become a completely different dog from the shy empty-eyed creature I adopted. However, I have changed too. I am beginning to feel whole. My relationships with my loved ones have improved, and I no longer feel trapped on a piece of ice in an endless sea of loneliness.It is ironic that my dog would be named Blue, because that’s what I call my episodes of severe depression. When my boyfriend asks how I am, I say, “I’m blue,” because it sounds easier to hear than, “every piece of me hurts, life seems futile and I do not see a point in existing.” Now the word ‘blue’ has a completely different set of emotions tied to it: love and happiness. Rescuing Blue saved me more than medication than yoga than countless changes in diet and lifestyle. He rescued me from myself.

2 thoughts on “How My Rescue Dog Rescued Me”