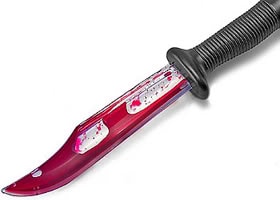 If you know anything about a recent horrendous attack on two American Pit Bull Terriers in Virginia you can help take an evil person or persons off the street and get a little money to spend on your own furbuddy.

The Humane Society of the United States (HSUS) is offering a reward of up to $5,000 for information leading to the identification, arrest and conviction of the person or persons responsible for the severe mutilation of two American Pit Bull Terriers. These two attacks, one fatal, are suspected to be related.

Around 6 AM on May 19th people in Fort Valley, Virginia found a badly wounded dog lying on the side of the road near their home. They took the dog to Charlottesville, Va., for emergency treatment. The young brown and white male dog, now named Phoenix, was severely cut on the neck and abdomen, but he survived.

The other dog was not so lucky. That same day around 10 AM. a father and son were fishing on Morgan Ford Bridge in Front Royal, Va., when they followed a trail of blood and discovered a severely lacerated puppy lying by the creek. He was mutilated in a similar manner to the dog found in Fort Valley. The good Samaritans took the dog to the Warren County Humane Society who immediately transported him to Winchester for emergency treatment. The puppy’s injuries were so severe that he was euthanized. The puppy was also brown and white and approximately 5 months old.
“Inflicting these kinds of injuries on defenseless puppies is a truly callous and despicable crime,” said Laura Donahue, The HSUS’ Virginia state director. “We hope that the reward will bring forward anyone with information about who caused these animals to suffer so terribly.”