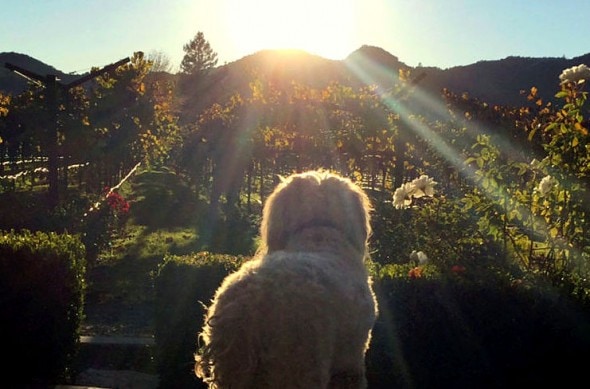 Life with a dog starts in tears.

I remember the first day Ben and I got ours. Junior. We had pulled him away from his mother and siblings, the only life he’d ever known, to live with us and do… what exactly? Could we manage this? Are we the right guys for this job? What if we break him?

We named our dog Junior because we imagined him as our practice kid. “We’ll get a dog,” we said, “and if we can keep him alive for three years, we’ll start the process of adopting a baby.” We kept him alive for 10 years and two days and what we learned was that all we wanted, all we ever wanted, was Junior.

I had decided, with some nudging from Ben, to get a Wheaten Terrier. After an interview with the Wheaten Club of Southern California, we got news of a new litter* up in Santa Ynez.  “When’s a good time for you to go up there?” they asked. We were already in the car. There were nine puppies, and when we walked in the door, eight of them jumped all over us, wanting to wrestle. One hung out on the other side of the room playing with a ball, doing his own thing. I thought: you have piqued my interest, young fellow. We sat on the floor with the breeder, telling our story, hearing hers, and after 20 minutes or so, the quiet one walked over, hopped up into my lap, put his paws on my shoulders and hoisted himself up to get a good look at me, nose to nose. She said: “I know you won’t believe me, but he’s never done that before.” I said, “May we have this one please?” 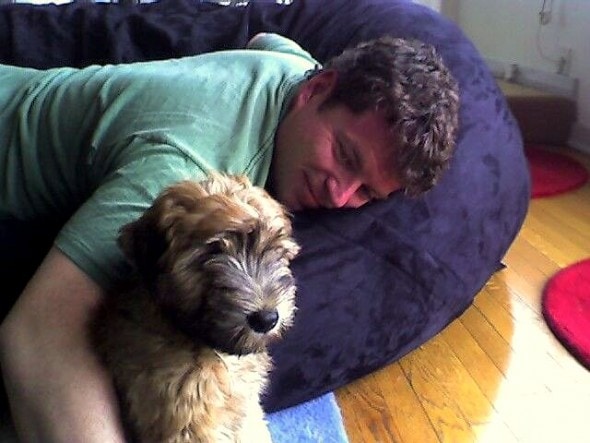 (The plan was to get one purebred, and then one rescue, for balance, but we could never bring ourselves to do it. What if Junior thinks he’s being replaced? What if he starts thinking he’s less special? Junior did a real number on us.)

One of the dog training books I bought—The Monks of New Skete, maybe—recommended spending those first few weeks in close quarters with your new kid. My show was on hiatus at the time, so I could. I did. I don’t remember what the point was, but I imagine it’s more an exercise for the people than the dog. You and the dog hang out and look in each other’s eyes and smell each other and take naps together and, before you know it, there’s a piece of your soul in a new body. Ben works from home, so he did it too, and his experience was the same. You bond. From that point on, when you are sad, the dog knows it. When the dog is sad, you know it. When everyone is happy, it’s a party. You have a friend like you’ve never had in your life, and he never even learns your name.

Our friend Irene said, “I keep expecting him to unzip his dog suit and a little boy to step out.” Everybody said things like this about Junior, and they were right. He had people eyes. Once, a few months after we got him, I took him on some errands with me (I always took him on errands with me; Junior was very enthusiastic about errands) and one of my stops was our local 7-11. I walked in and the guy behind the counter said, “Your dog looks like a person.” I said “I know,” and he rung me up and on the way out, a stranger walking in said: “There’s a dog out there that looks like a person.” It came up a lot. 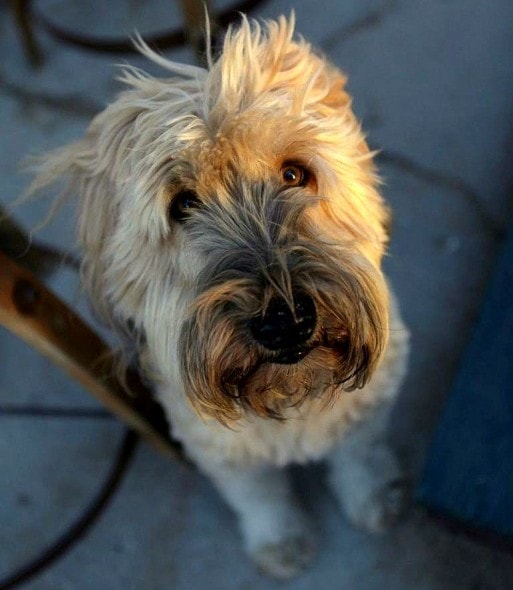 He had human traits, too. His favorite treat was a bully stick, those things that are made out of bull tendons or whatever, so we’d give him one every month or so and it would last a few days. He would make it last a few days, because this is what he would do: he’d only chew on it if we were both in the room to watch. If one of us left, he would stop and go do something else. If he had been working on one for a couple of days, and Ben and I came back to the house after being gone for a bit, he would run to the door to greet us, and then go right back to the stick. “Good. You’re here. You can watch me enjoy this now.” It was important to him to see us getting our money’s worth. The son of showbiz people in every way.

When I walked him, people stopped to ask questions, mostly variations on, “What is he?” It happened so often that when people didn’t make a fuss over him, I thought: What the hell is wrong with you?

A dog cracks your heart open.

A dog introduces you to a simple, honest, new kind of love. Or maybe an old one: the one you felt when you were a kid and the world was full of wonder and affection and possibility and you only knew a couple of people and they were your everything. A year or so into having him, I was doing some writing in my office, and I looked down and he was there at my side, looking up at me. What does he want? I thought. I’ve fed him, we’ve walked, we’ve wrestled. What is it, Junior? And then it hit me: he just wants to be near me, because we’re friends. 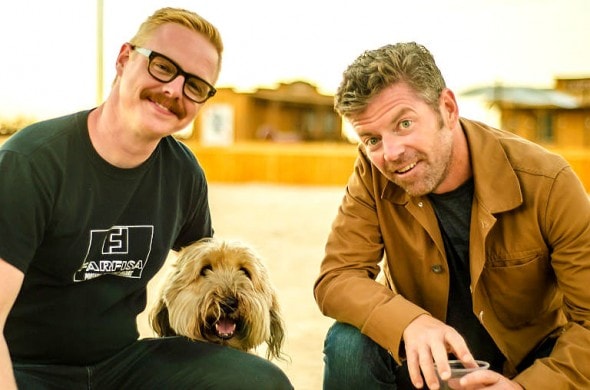 We stayed really good friends, me and Ben and Junes. Just last week, we took him up to Napa with us. He went on a few long runs with me. He roamed in some vineyards and charmed some new people. When I hit my head on a light fixture in our room, it was the concern on his face that made us go to the ER. When Ben lost his grandma last month, Junior knew to hang even closer to him for a few days. He slept in the bed with us, and his thing was that he’d stretch his whole body out as long as he could, and press it really hard against one of ours, so that the most of him could be touching the most of us.

He ruptured his spleen over the weekend and had to have it removed. The vet called Monday morning to say that he was on the mend, [and] that if we got him to eat, we could take him home in a few hours. We filled our pockets with treats and baggies of ham and went to visit him, and by the time we got there, post-surgical complications had set in. The vet said his blood was clotting; it happens sometimes in cases like these. He told us to go home and sit tight. He called us later to say the clots looked like they had reached his brain. He called 20 minutes or so after that to say that he had stopped breathing. We went back in to see him and put a few last kisses on his sweet head and clip a couple of locks of hair. Probably some other things happened. We’ll never know. 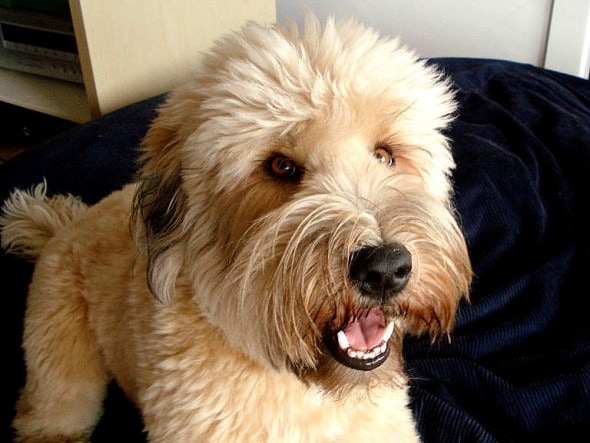 We spent Monday afternoon just roaming. Wandering the house like zombies, retracing the steps of the route we used to walk him. We didn’t know what else to do. And then a couple friends of ours texted us to go look at the sunset, so we did. It was perfect. Ben played R.E.M.’s “You Are The Everything” on his phone, and I poured us a couple of whiskeys, and we toasted the best friend we ever had, and we watched Junior’s sunset fade away. Life with a dog ends in tears, too.

Ours is not a unique story. I know that. You might have had your heart expanded and broken by a dog yourself. If you have, you know what’s happening right now. If you haven’t, I can tell you this, even now, even as we wander this house looking for pieces of our shattered hearts: it was worth it.

But, more than anything, I just wanted you to know about Junior. He was really something. 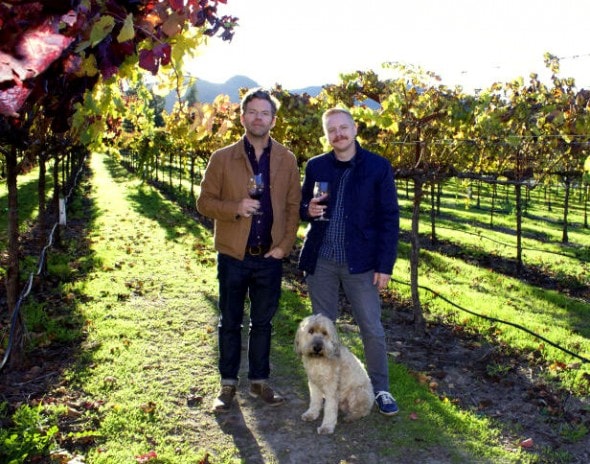