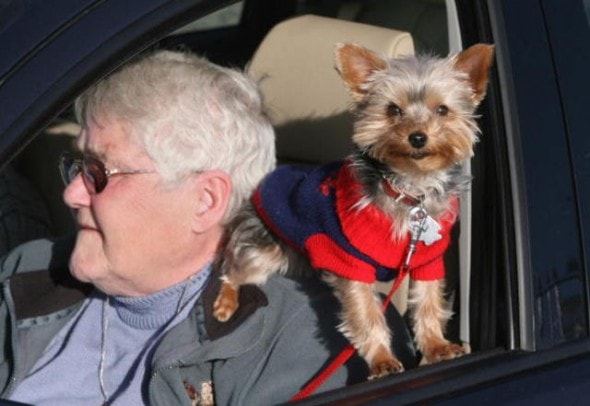 Legislators in Illinois have proposed a bill to stop drivers from allowing animals to sit on their laps while they’re on the road.

Representative Dan Burke (D-Chicago), a co-sponsor of the bill, says that dogs on their owners’ laps is a dangerous but common habit.

“Because I travel, I can’t help but observe the number of people with dogs on their laps,” he said. “It is a public safety concern. If a driver is distracted, certainly it would be a risk to other motorists on the road.”

Burke often travels with his 120-pound giant schnauzer, and keeps him restrained in the back.

“He would certainly prefer to be in the front seat, but that’s not happening,” he said.

The projected law does not seem to be much of a deterrent – drivers would only face a $25 fine, and they could not be pulled over unless they were committing another driving violation.

Many are opposed to this bill as it moves to the House floor.  For some, there are “more serious issues in people’s minds, like Illinois’ financial crisis.”

“This is, unfortunately, the worst time in our state’s history,” Burke said.  “It’s a matter or prioritizing… Everything is timing.”

What people seem to be ignoring, however, is how dangerous it is to the dogs who are helping mommy and daddy drive.  Unrestrained dogs, particularly ones in the front seats, are at risk of serious injury and death in the event of an accident.  Many assume, “well, I’m not driving that fast,” or “I’m just running to the store.”  What they aren’t realizing is that it only takes a split second for a collision to occur.  While these dog-loving drivers may be absolute saints behind the wheel, there is no guarantee that some speed-demon won’t go plowing into them at 90mph.  Or even 20 – it doesn’t take much for a serious accident to happen.

Melissa Ramirez of Chicago began a dog seat belt company after her dog Max was injured in a smash-up.  Her husband Joe was driving with Max unrestrained in the front seat when another motorist ran a red light and t-boned his car.  Max was thrown into Joe’s neck and landed near the gas pedal.  Joe needed back surgery, and Max was left paralyzed.  After numerous surgeries and physical therapy, Max is limping, but walking again.  His trauma has not been forgotten by Ramirez, and she hopes her company will prevent such harm to other dogs.

“The emotional piece is awful, but also the financial hit we took… It was more than $12,000 for all of Max’s medical bills,” she said.  “I don’t want anyone else to go through something like that when it’s preventable.”

She said that ASPCA lobbyists have told her the bill won’t be killed on the House floor, but rewritten to include crate or seat belt requirements.

Ramirez’s seat belts for dogs start around $20, and can be purchased here:  http://www.mydoggieseatbelt.com/

Pennsylvania might want to take a cue – earlier this week a dog managed to put a car in gear after his owner left him unattended with the car still running.  It struck a man who thought his body alone could stop the runaway car from colliding with a truck, and he was pinned between the two vehicles.  He was treated for minor injuries, but perhaps this will be a lesson well-learned for the man and the dog’s owner.