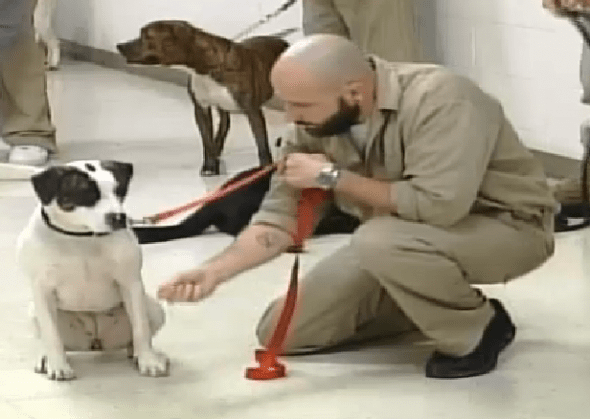 Thanks to a partnership with the inmates at CCA Lee Adjustment center, the euthanasia rate at the Kentucky River Regional Animal Shelter is declining.

The shelter’s euthanasia rate has dropped 22% since 2011, when the shelter first partnered with the inmates. Many of the dogs that have gone into the training have been only hours away from being euthanized because they are viewed as too aggressive to be adopted. “All these animals are so close to death,” said Tammy Noble, the shelter board chairwoman. “So the guys (at the jail) just work with them and it’s a huge opportunity and great resource for our animal shelter.”

The inmates at CCA Lee Adjustment Center have trained over 650 dogs since their program began in 2005. The inmates take about 12 or 13 dogs at a time. The dogs spend six to eight weeks working with inmates learning basic commands and getting training so that they are suitable for adoption. “We just apply some basic manner and hand signals like sit, down and stay,” said inmate/trainer Michael Lewis. The inmates benefit from the program as well and often get attached to the dogs. “I’ve got three years left (on sentence) and I’m all done,” said inmate/trainer Richard Gero. “I’d rather just stay here with the dogs than even go back to my home state.”