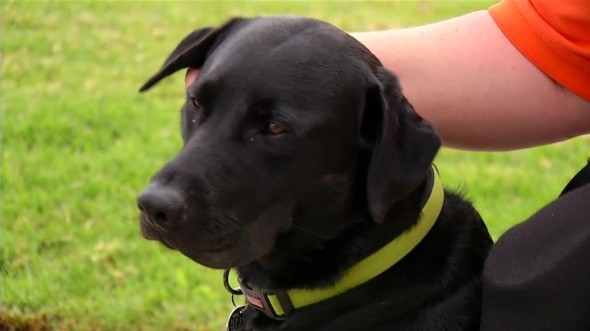 Donovan State Prison in Otay Mesa, California has rolled out the first graduates of a new state run program that has inmates training dogs for wounded veterans.  Not exactly thought of as the most life giving and affirming place, the prison inmates say they are giving both the dogs, and themselves, a “new leash on life.”

This past Friday, the first graduates to complete the program were given a ceremony to mark the occasion.  Both wounded Army vets and autism patients were in attendance.  A Labrador retriever by the name of Dante was given to a vet to assist her with both mobility issues, and problems with post-traumatic stress disorder.

The program has been named Prisoners Overcoming Obstacles and Creating Hope, or POOCH for short.  The program is aiming at benefiting everyone that comes into contact with it.  Inmates get a chance to learn a new approach to problem solving, and working as a team and individual skills as well.  The dogs receive training that puts them assisting people get back to something that resembles normal life, and some military vets are getting the help that they need and deserve.

“They say a dog is a man’s best friend, and they’re not wrong about that,” said David Mix, an inmate at Donovan.

“You help somebody out in the public that really needs a service dog,” said Mix. “You help the inmates, their morale their work habits, everything changes…With a dog comes responsibility. So you think about things a little bit different.”

Research has shown that programs like this one can do great things for everyone involved.  The programs are therapeutic, and go far to the reduction of violence in the correctional system.  A fact of everyday life when one is in prison.

“You have a sense of pride within yourself because you noticed that change. It’s a change for the better,” Mix said.

Dante is the first graduate of the program, and he was given to Iraq Veteran Captain Krpata.  The captain was injured while on deployment in Iraq, and unfortunately lost a leg.  The emotional stress of living with one leg, and every other thing a soldier on deployment goes through caused great depression, and post-traumatic stress disorder.  Dante is here to help her with all of that,

“Having a service dog saved my life. Because instead of worrying about me or focusing on me or worrying about what’s going on in my head, what I think I did wrong in Iraq or whatever, I stopped doing that,” Captain Krpata said.  “When you feel like you’ve lost everything. And you worry about is not taking care of your troops. Taking care of Dante and worrying about his every little need is exactly what I needed.”

There are plans in place to continue the program at Donovan.  They may even be expanding the program to more inmates and more rescue dogs.  Everyone involved sees it as a win, win situation.

“He has uplifted my spirit, given me a sense of pride that you normally won’t get just from doing time,” Mix said. “So it’s a positive situation for everybody. For myself, the dog and the beneficiary.”