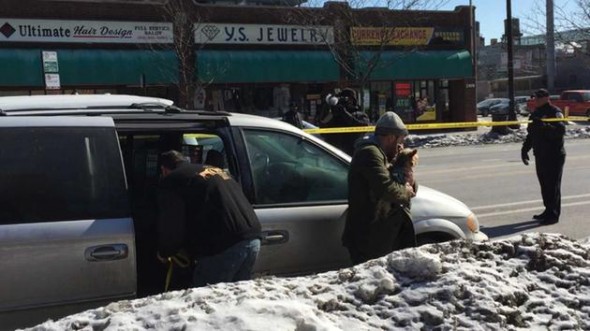 A woman that is responsible for the recovery of seven stolen dogs in Chicago got to meet with some of the very thankful families that her great work helped to be complete once more.  The families wanted to do something to personally thank her for her effort.

Two of the families’ members, Tad Tomina and Rob Sayre, went to meet Daisy Bowers.  This was just one day after she brought their furry family members home safely.

The incident happened this past Wednesday.  To read Life With Dogs’ original coverage of the theft, click here.  Two men were seen stealing a minivan that belonged to a local groomer called Urban Out Sitters that had seven dogs inside it.  After abandoning the van a short while later, the two men were nowhere to be seen.  It just so happened that they ditched the vehicle directly in front of Daisy’s salon.  She was the first to realize what was going on.

After spotting the van out of the front window, Daisy could see one of the dogs in the front seat.  They had been parked and left in the car all alone for over an hour.  Daisy knew that couldn’t mean anything good, and got help straight away.

“He looked so sad looking in the window, like ‘Help me,’” said Daisy.

She called the police, and it was soon after that the dogs were all brought back to their families safe and in good health.

Sayre and Tomita visited Daisy’s salon on South Wabash Street on Friday.  They came with many thanks, and gave her a reward for her efforts.

“It’s a joy just to help someone, or just to see other people happy. It’s a joy,” said Daisy. “It’s a nice ending to it.”

The families did have a lot to be thankful to Daisy for.  However, while she made sure they got the stolen dogs returned safely, both Tad and Rob were still left a bit mystified by what they were told by Urban Out Sitters.  Apparently, the groomers that owned the van told the families the driver was carjacked at gunpoint.  What had really happened was the driver had left the van running and unattended at the time the van was stolen.  They feel they are owed an explanation, and want one fast.

“They owe us an explanation, for sure,” said Tad.  He and Rob said they haven’t made up their minds about how to handle the situation with Urban Out Sitters.  “We haven’t made any final decisions yet about what we’re going to do moving forward.”

It is noted in the police report that a witness to the theft stated that when he tried to intervene, one of the suspects flashed at gun.  This drew the witness off the suspect for fear of losing his own life in the process.  The two got into the running vehicle, and took off.

The owner of Urban Out Sitters, Joseph Giannini, has so far been unreachable for comment on what’s really going on with the situation and why the families were given misinformation in the circumstances of the theft of their dogs.