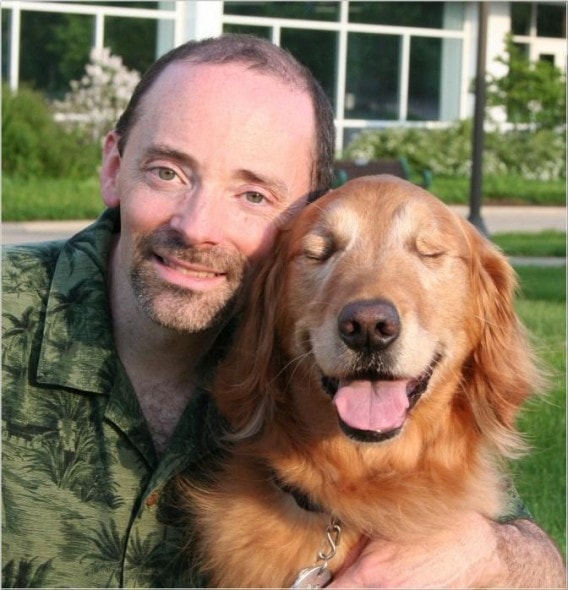 Mark Condon, the owner of the renowned blind therapy dog and central character of a new children’s book, Dutchess, gave a bit of his time a few days ago for an interesting interview about Dutchess, her upcoming book and about the principles that inspired the book.

Dutchess is a therapy dog that works with people who have autism, especially children and teenagers. She had to have surgery in 2011 to remove both her eyes but she continues to overcome this disability each and every day with joyful persistence.

It was his experience with Dutchess that inspired Mark to write the book, A Day With Dutchess: Life Lessons From a Blind Therapy Dog. Though based on Dutchess’ story, this children’s book actually involves a host of characters and is about celebrating differences and overcoming the disabilities and challenges that life brings.

Both the children’s book and Dutchess’ real life have inspired many and I am grateful to have been able to speak to Mark about her.

What is Animal Assisted Therapy and how does it benefit children with autism? How did Dutchess get involved?

“It’s something that I’ve been interested in since I got Dutchess involved….A colleague at work told me she had her dog trained as a therapy dog. I figured Dutchess would be good at it as she loves people so we went through the training…The trainer-a friend of mine-suggested Dutchess might do well at the Anderson Center for Autism in Staatsburgh, New York. Dutchess took right to it…Even though I walked in knowing essentially nothing about autism.

I think anyone who receives a visit from a dog or animal receives a calming effect. Studies show it decreases blood pressure, etc. Some of the people we work with range from high functioning to completely nonverbal. When we first started, we were working with one young guy, a teen, who was verbal but didn’t initiate conversation. So, one of the goals was to initiate conversation. He would come and pet Dutchess and throw the ball but didn’t really say much to me. One day, just out of nowhere, he started asking questions about Dutchess and about my other dog… I assume that Dutchess being there allowed him to do that.

Another example: one of the guys we are working with now is in his early 20s and is completely non-verbal. He uses an iPad to text what he wants to say. He will get down on the floor and pet Dutchess and is physical but doesn’t speak. But now his speech therapist created a set of icons that are dog related and he communicates and asks for Dutchess.”

Does it take a certain temperament as I know autistic children can be unpredictable? Do they ever harm her?

“Dutchess has always had lots of energy and always had an element of being grounded. I think they saw some of that in her right away. She doesn’t startle or react to sudden noises or being touched from behind. A dog that is reactive would freak out a little. There have been times a guy hits her with a tennis ball and she just stands there. She is very laid back and craves human contact. She will go up to a guy who may be afraid and she has a knack for reading whether to approach or wait for him to approach.”

Tell me a bit about the human/canine bond that you speak of and its importance.

“From the third person, I see folks in general, not just at the autism center, but visiting a hospital or school, and people will connect with an animal differently than a human. I talk and connect with people I would otherwise never speak with because of Dutchess.

There is also a lack of judgmentalness on the part of the animal. Dutchess doesn’t care that Phil doesn’t speak to her. She still likes to visit him. She is not put out by the lack of verbal communication. Or she isn’t put off by someone who makes random vocalizations…It doesn’t occur to her to have a “set of rules” that someone has to play to. One of the big elements is that the animals aren’t judging them and hopefully that leads to people to people relationships.

I can see it in myself…I feel like I consider other people differently because I have a dog. My approach to interacting with others is less worried about what they think of me or whether they are judging me and that opens me up to approach them at face value and hopefully they will accept me but if not I don’t take it personally-the dog attitude.“

What caused Dutchess to lose her vision in 2011?

“Pigmentary Uveitis or Golden Retriever Uveitis…One of the symptoms is the dark pigment deposits on the colored part of the eye leading to inflammation. The reason for removal of the eyes is because secondary glaucoma becomes untreatable. Once the last option of drops stop being effective, that’s the time to do surgery, and she was in pain so we scheduled it.

The condition is genetic…It hasn’t been recognized for all that long in the Golden Retriever world. Dutchess donated blood to a study to identify a genetic marker. That’s in progress now. A vet, Wendy Townsend is spearheading this.”

Does she continue to work with children and people that have autism?

“Yes, she began to have her vision problems 3 years ago. I brought her to a veterinary ophthalmologist and was told she would have to have her eyes removed. I started teaching her commands so she would be able to deal with a lack of vision. After the surgery, in February 2011, she was one night in the hospital and within 3 weeks she was back at the Anderson Center.

I was honestly a little worried, I was concerned that because she couldn’t see, noises may startle her more. This didn’t happen at all! It was like nothing changed. I always tell people, I think she is better at her job now than before. Not that losing her vision was good, but the guys she works with have to account for the fact that she has no vision and that’s something that is a goal for many of the guys-empathy and perspective.”

Could you tell me a bit about the book? Is this based on a real account?  For instance, is there a real “Droopy” in Dutchess’ life?

“It’s a combination: Droopy is a real dog but Droopy’s name isn’t Droopy. There is reality and then some elaborations…The idea was to present Dutchess’ story for a children’s audience and to say that here is a dog that has had her own physical issues but hasn’t let it prevent her from doing positive things.

We didn’t want to dwell on the fact that Dutchess is blind…it’s a situation. That was part of it. We wanted to involve a diversity of people and animals that she impacted, like visiting the autism center. The same children in the story wind up contributing to the happy ending.

One of the characters is like “oh I’m down, I’m depressed” and doesn’t feel useful and Dutchess…empowers this other character to take the lead on something that helps others. We wanted to have as many animal and human characters so that there would be at least one that a child could identify with. We tried to build a lot of positive messages without being preachy and still being fun.”

What motivated the book?

“I mentioned it to Karen Jones, a writer who has written a few articles about Dutchess-a New York Times article even-and has known her for a while. When I told her about Dutchess’ health, we discussed that there must be a message in there somewhere. Then we decided that it lent itself to a children’s story. Julie Philips, the other author, and a friend, has some personal interest in the field of autism and is a very gifted writer and story teller. And Sammy is the illustrator and a friend of mine and she has done all of Dutchess’ logos and other things, so I was fortunate to have these connections already that could make these contributions.”

What’s next for Dutchess?

“A lot! Continuing to work at Anderson- she loves doing that! Additionally, we have other therapy jobs that pop up-hospital visits, visits to daycares or school programs. We even went to Newtown, CT after the events there.

We have also begun giving talks about Animal Assisted Therapy…at autism conferences and educational events. It really engages people. We get a lot of Q & A going on.

We have kind of hit the road and done the presentation circuit and I think more of that is in our future. She seems to be a good ambassador. We are also excited about the book and want to get the word out. We want to show how it’s okay if you are different than someone else in your class…Dutchess is a spokesperson for that. And we are always going to dog related events…a lot of times shelter animal events. She is getting to be a bit of a celebrity.”

“Yeah, first…People with pets who are having health issues: my words of advice are that the animal knows what to do and they will figure it out. Obviously, support the dog and teach them commands. Put them in situations to allow them to be successful but don’t coddle-the dog will pick up on that. If I kept Dutchess inside and never let her out she would suddenly worry and pick up on it.

I will give one quick story. A couple months after Dutchess had her surgery, we went to a hospital. One older woman was in a room by herself and I brought Dutchess in and she was petting her and talking with her..She said she had had a golden retriever when she was a kid. Suddenly, she realized that Dutchess didn’t have eyes. Turns out she was there for eye surgery and she just bawled…She felt really encouraged.

Also, Dutchess was working on me way before she was working on other people. It sounds cliché, but you go home and have a dog to talk to and someone that’s happy to see you and it allows you to deal with difficulties in a positive way.”

Any last words to people who will read the book or who you want encouraged by it?

“One of themes of book is the value of diversity and different perspectives and I hope that comes through…Accepting people with differences and understanding that these aren’t as fracturing as you would think and also not discounting the abilities of someone with a disability. As far as pet owners go…I say trust your dog. Animals are much more perceptive than we give them credit for. Try to see the perspective of the dog. I think pet owners need to do that if a pet is having an issue…consider it from the animal’s perspective. The question you have will answer itself….It’s all about cognitive empathy.

I will throw in that I’ve been fortunate enough to have some friends and we have started our own therapy dog organization, Canine link. . I’m all for any canine therapy organization. We started our own as we wanted something closer to home and, as a research scientist, I am interested in quantifying the impact these dogs are having on people and I think having our own organization will make this easier and more viable.”