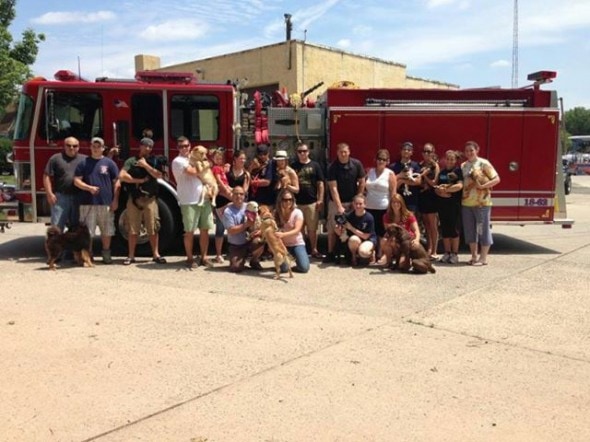 When 14 dogs were rescued from kill shelters in Georgia and on their way to a rescue group in Maine, it seemed their struggles might be over. But the unimaginable happened when Douglasville resident Jonnie Craig’s SUV overturned on Interstate 78 in New Jersey.

The vehicle, carrying a variety of dogs, including six eight-week-old beagle puppies, was heading to Libby’s Legacy, a rescue group in Buxton, Maine. About 17 hours into the 24-hour journey, Craig’s SUV rolled over, injuring her and causing three of the dogs to get loose.

But all was not lost – the nearby borough of Lebanon heard about what happened and came to the rescue.

“It was just amazing how that city just rallied and helped our dogs,” said Kim Meek, the Douglas County Animal Shelter volunteer who organized the trip to keep the dogs off death row.

The Lebanon County Fire Company and Clinton rescue team arrived and pulled Craig from the SUV using the Jaws of Life. She was taken to a hospital a received 19 staples to seal a laceration to her skull.

Amazingly, the vehicle only rolled over once and landed right-side-up. Three of the dogs got away, but eleven still had to be extricated and rushed to the Hunterdon Hills Animal Hospital. A Chihuahua named Harley was found close by, but the other two still had to be found.

Volunteers searched, but could not find them. The scene had to be cleaned up, and just before leaving, fire chief Kevin Saharic and his EMT wife Michelle noticed some movement in the tall grass next to the street. It was the missing puppy, which only left Honey, a dachshund mix, to be found.

Harley was the most badly injured of all the dogs, and needed surgery to remove one of his eyes, which had been wounded.

Meek was anxious to find out what was going on with the dogs, and came into contact with Susan Brown, the woman who run’s Libby’s Legacy. People from all over flooded her Facebook inbox with messages, offering to help in any way they could. They really needed help finding Honey, but as it turns out, Honey helped herself by walking into a groomer’s shop, still donning her trademark pink bandana.

A number of people quickly stepped up to adopt the dogs: The Saharics’ daughter Marlaina and her fiancé Tucker Harding brought home a puppy and named him Flip; their niece Emily Sell adopted a chocolate Lab named Nuka; firefighters Ron Lapcysnski and Justin Badger each adopted a dog; visiting New Hampshire couple Becky and John Malcolmsom brought home a dog; and firefighter Jon Bellemare brought some of the remaining dogs on to Buxton.

Harley is still recovering at Animerge Hospital. Brown has so far received over 50 applications for his adoption, and has been given more than $1,000 – including a hefty $500 donation from a woman in Texas – to cover his medical care.

The town with a heart of gold did even more – a nurse from the hospital where Craig was treated drove her to gather her belongings from the totaled SUV, took her to visit the dogs and helped her find a hotel.

They will also be commemorating the day of the crash each year by holding a massive animal adoption event. Meek and Brown both plan to attend.

“The way it unfolded and worked out so miraculously well brings to mind the word ‘kismet,’ which means fate, but even better,” said Lauren Case, a nurse at Hunterdon Hills Animal Hospital. “The light and hope the puppies bring to their new owners, people meeting each other, the friends down from Maine who live just two towns over (from Buxton), what are the chances of that? It just shows that there’s something bigger out there than us.”

According to Meek, the euthanasia rate in the Douglas County Animal Shelter is down to 11 percent, and it’s because of the collaborative transport efforts to northern states that so many lives are saved.

For more information on how you can help save a dog’s life, call or text Kim Meek at 678-386-8184, reach her on Facebook, or visit the Douglasville Pawlunteers.