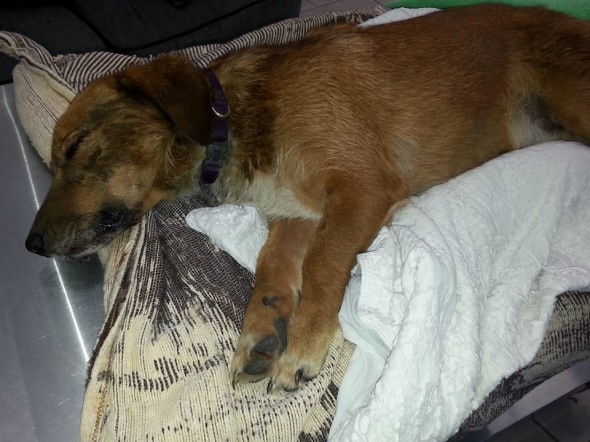 A reward of over $500 is being offered for anyone with information leading to the arrest of the person responsible for throwing a dog from a car in North Canton, Ohio on Saturday. Witnesses called for help and Jade’s Rescue attempted to save the dog, but unfortunately the dog didn’t make it.

Witnesses saw a young dog hurled from a white Ford Mustang at the intersection of Whipple and Wise Avenues around 3:45 p.m. The dog landed in a drain that was flowing heavily from recent rains. One of the witnesses flagged down a car and called Jade’s Rescue for help. Another witness held the dog’s water up out of the water so he could breathe until help arrived.

Diane Aquino, owner of the shelter, drove to the scene and along with her husband pulled the dog from the water and they rushed him to an emergency clinic. Unfortunately the dog had to be euthanized.

“This little guy tried and fought for life all the way there,” said Aquino. “He was moving just his front legs like he was still treading water and I covered him and rubbed him to get him warm along the way.”

The dog suffered spinal trauma, punctured lungs, other wounds and was severely dehydrated. The dog was completely paralyzed from his mid-section down. The veterinary staff had no choice but to put him down.

Anyone with information about the dog and the incident is asked to reach out to Jade’s Rescue. They can be reached at (330)614-0300 or via e-mail at [email protected]