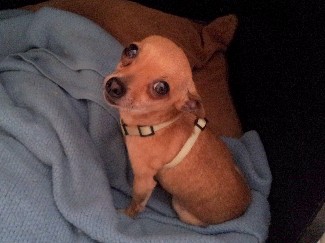 Joey, an adorable, tiny Chinuahua was battling it out with cars on the road when he was first found by the staff of Milo Foundation, a non-profit domestic animal sanctuary in San Rafael, California. One of the staff members from Milo Foundation, Melissa Night, was on her way back from a vet appointment when she came across the emaciated little guy just running full speed down the center of the road, ignoring the perilous traffic.

Joey kept trying to jump out of the way of the speeding trucks zooming past him. He was too small to scale the embankments in order to successfully get off the road and was so skinny that Melissa was sure that he would not make it if he was not rescued.

Melissa tried several times to get Joey safely in to her car, but he was so terrified, he kept resisting her attempts and would run away. She realized that she needed additional help and a net or trap to successfully rescue Joey. Melissa raced back to the sanctuary to gather the supplies and recruit the help of a fellow employee, Marc.

Catching Joey required some incredible moves on Melissa and Marc’s parts, involving Melissa pulling up and driving alongside Joey while Marc jumped out of the passenger side of the moving vehicle and leaped with the net, finally catching the resistant little Chihuahua.  They put a jacket on Joey and pulled him out of the net.

A few minutes into the drive, Joey finally poked his little head out of the jacket, looked at Melissa and Marc and stopped shaking. It was like he knew he was finally safe! Once he arrived at Milo Foundation, Joey was able to begin putting on a bit of weight. However, when the time came to be neutered, he was still too skinny for the operation! In addition, Joey had horrible teeth that pained him often.

While waiting for the needed dental and medical care, Joey encountered the person who would bring him to his forever family! A kind hearted woman, Tara, heard that Joey was waiting for dental work. When she saw that his teeth were bothering him, she brought him somewhere and paid for the whole procedure herself. She could not stand to see Joey in pain. That’s when the Milo Foundation staff knew that Tara was the right forever home for Joey.

Joey is now living like a king with Tara and her family and goes by a new name-Rocky. He was able to be neutered and have the teeth that bothered him extracted and is now a happy, healthy little guy.  He has claimed a place on the family sofa that is now his bed, replete with a little orange blanket that he also chose. He enjoys being in the home with Tara and her family so much that he hardly cares for the twice a day walks they take him on! She describes the joy that he adds to the family:

“He smiles constantly, hysterical, and his tail is wagging a million miles an hour most of the time! We’re all just head over heels with him and I’m sure he can tell! He’s SOOO mellow, flips over on his back as soon as someone starts holding him so he can get a belly rub. Such a funny little guy…anyways, we are desperately in love. I can’t believe how right this fit is. It’s like we were meant to find him.”

Milo Foundation was named after an Australian Shepherd, Milo, who motivated founder Lynne Tingle to become passionate about providing a good life and a home for many animals in need. The Milo Foundation is an established 501(c)3 nonprofit, no-kill organization providing an alternative for homeless pets throughout northern California through education, adoption services and providing sanctuary at the organization’s 283 acre property until a permanent home is found.