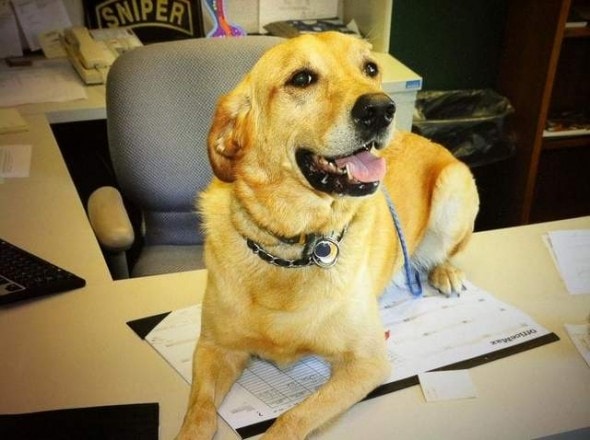 Police in Des Moines, Iowa are making changes after one of their K9s Harley died in August from being left in a hot vehicle. The officer responsible for leaving Harley in the vehicle and ultimately his death will no longer be able to work with dogs and has been suspended.

Harley, a 7-year-old lab had been paired with Officer Brian Mathis. They worked on the vice and narcotics unit. On August 29th, Mathis drove to the police station intending to leave Harley in the air conditioned office. Mathis became distracted by a phone call that dragged on longer than expected and left Harley in the car. When another officer accidentally kicked Harley’s food bowl Mathis suddenly remembered about Harley, but it was too late. Harley was alone in the car for more than an hour on a day where temperatures reached 96 degrees outside.

The tragic death of Harley has prompted the Des Moines police to make significant changes for the care of their K9s. Prior to this incident the department’s K9 policy had only a brief section on dog care. The department will now increase training for its handlers, including adding animal welfare and care training. “The goal is to make sure these animals that are our partners are healthy,” said Police Major Steve Waymire.

The department is also buying new alarm systems with heat sensors for all police cars. Harley’s vehicle did have an alarm system, but it only worked when the car was running. The new units will fix this problem. “We looked for a system that took less action to turn on and more to turn off,” said Police Sgt. Scott Raudabaugh. The new alarms will turn on automatically when the car starts, but officers must manually turn them off. In order to manually turn them off an officer has to press and hold down a button. When they do so a message will come up on the screen reminding the officers to make sure no dog is left in the vehicle. If the officer doesn’t actively deactivate the alarm it will remain on.

The alarm will also help let the officer know when the temperature is getting too high in the car. The system will honk the horn of the car when the temperature starts to get too high. If the sensors don’t see a temperature drop after this first alert, then the unit can roll down the car’s window and turn on fans. The unit also has the capability of turning on the car sirens and lights and calling the officer’s cellphone or dispatch. Officers will also now be equipped with tools that allow them to remotely open the car’s doors.

The Des Moines police want to make sure a tragedy like Harley’s never happens again. They hope these changes will protect the six K9s they currently have and all future K9s on their force.