On August 12, 2015, two police officers from the Kansas City Missouri Police Department responded to a burglary call, they entered an abandoned home and instead of finding the trespassers, they found two abandoned dogs. The pets were so malnourished they seemed close to their deaths, but thanks to the officers the dogs have found rescue and are looking for a forever home. 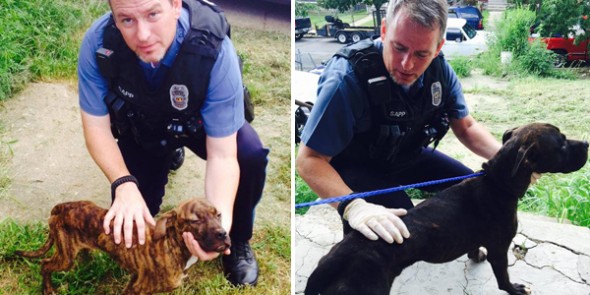 According to the officers, the dogs were found in a filthy basement. The floors were covered with feces and the dogs, two male Pit bull mixes, didn’t have access too food or water.

It is believed the dogs had been locked in the basement for weeks. The hero men gave the dogs water and then transported them to a vet clinic. The KC Pet Project is caring for the dogs and nursing them back to health.

Both dogs are expected to make a full recovery and rescuers hope they soon find loving forever homes.