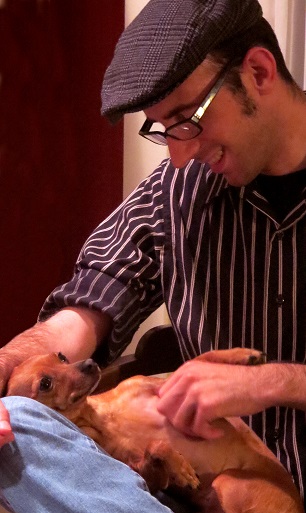 In June 2011, Kevin was not feeling like life was going the way he had hoped. He had graduated from college in 2006 and was now working in a thankless job that he did not enjoy. He was also facing some difficult challenges in his personal life.

One day, to take his mind off of his circumstances, Kevin’s family offered to take him to some of the local animal shelters to check out the dogs. He had always wanted a dog and had been doing some serious research into caring for and owning one.

However, as he went out with his family that day, Kevin was skeptical that anything good would come of the excursion and figured he needed to research more before adopting anyways. After visiting two or three shelters, Kevin was beginning to feel pretty validated in his initial skepticism even though he had met plenty of friendly animals. By the time he reached Animal Adoption Center, a no-kill non-profit animal shelter in New Jersey, Kevin had pretty much settled on the prospect of not putting in any adoption applications in the near future.

It is truly strange how things work out, though. Just as they were leaving, Kevin noticed a nervous little dog in one of the outside kennels. She was wearing a red harness and was the only dog not barking. Kevin went in and asked about her and found out her name was Lucy and she was a Dachshund/Chihuahua mix. She had just been surrendered the day before.

When Kevin first walked in to the kennel to greet Lucy, she backed into a corner and only came over tentatively after he crouched down, after she had already walked twice around her plastic dog house at the far end. Once she had worked up the courage to come over, she just rolled over in submission and accepted a belly rub and then walked away and did circles around her dog house again.

The third time she approached, however, she climbed right into Kevin’s lap, much to the surprise of the attending volunteer since she had not trusted anyone to get that close up until that point. Kevin recalls that moment fondly:

“I remember sitting there in the hot afternoon sun with her head on my chest and feeling almost instantly more at peace than I had felt in months and, for the first time in a great while, that there would be a clearer, brighter path going forward.”

Kevin put in an application to adopt immediately and the staff helped him through the process. Everyone was surprised at how quickly Lucy bonded with Kevin.

When Kevin brought her home, she sniffed around a bit and then seemed to immediately transform from a nervous shelter dog to a playful, happy dog that had found her forever home. Ever since that moment, Lucy has continued to be an important and positive addition for Kevin and his family.

Even more importantly, Lucy inspired Kevin to pursue a career working with shelters in the hopes of not only helping other great animals find new homes but also helping other people find a pet that would have as positive an impact on their life as Lucy has on Kevin’s. After years of searching for a new career path that he could be passionate about, Kevin had finally found his passion. Shortly thereafter, Kevin began to volunteer at the Animal Adoption Center.

Kevin is now the Volunteer/Outreach Coordinator for the Animal Adoption Center and is so glad he adopted Lucy:

“I am happier and more fulfilled than I have been in the 7 years since I graduated. I am so thankful to have had the chance to experience first-hand the truly wonderful impact animals can have in our lives. I am reminded not only of their commitment to us, but our commitment to them, every day through the work I do and through that little four-legged ball of energy I see doing 2 foot vertical leaps when I get home from work.”