Kite Surfer And RNLI Save Dog Swept Out To Sea 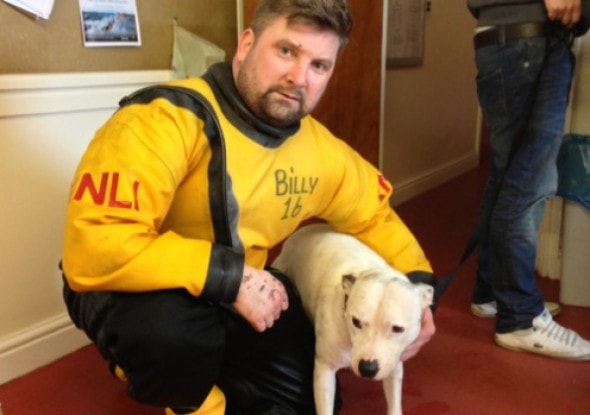 Storm was swimming in the sea off the coast of Lincolnshire on Saturday when he was swept out over 300 yards away from the shoreline. He survived with the help of a kite-surfer and the Skegness RNLI lifeboat team.

Storm’s owners called the coastguard for help as soon as the Staffordshire bull terrier went missing in the sea. When the Skegness inshore lifeboat crew arrived on the scene they spotted Storm 300 yards offshore. He was terrified and clinging to a kite surfer who had come across Storm right before the rescue crew arrived.

The crew maneuvered their lifeboat out to the dog. “The poor dog was absolutely exhausted by the time we had reached him,” said Dean Sumner with the RNLI. “Once the kite surfer let go he bobbed below the surface and that was when we were able to grab him. He was very cold and my team were able to quickly warm him up and bring him round.”

Storm made a full recovery from his ordeal. The coastguard is grateful that Storm’s owners called them for help instead of trying to rescue Storm themselves. “The worst think pet owners can do is enter the water themselves,” said Sumner. “Things can quickly go wrong.”