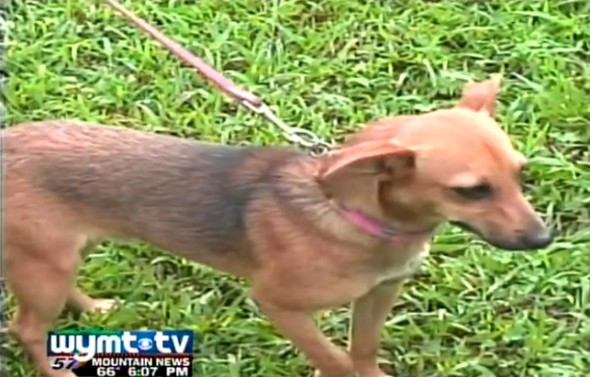 A dog called Ted has been renamed Lucky after surviving a fast-moving mudslide that nearly swept him away.

“My son was calling him Ted. Since this happened I believe he deserved the name Lucky,” said Darcy Howell.

Torrential downpours in Floyd County, Kentucky caused several mudslides across the area. The hillside behind the Howells’ home was partially washed away, and Lucky’s kennel was right in the path of destruction.

The family believes the chicken wire and fencing they had prevented Lucky from being swept right into the creek next to their house.

“I was just glad the dog was ok. He was so scared he could have got out, but he wouldn’t. My son had to go cut him out of the wire to get him out of the cage,” Darcy said.

After Lucky was plucked from the muddy water, the Howells found that the event had been captured by a surveillance camera.

“I was shocked at how fast it come. The reason I say that people need to see it because this could happen to someone’s house,” Darcy said. “It happened so fast you know what I’m saying. A split second is all it takes for something to happen like that.”

Though Lucky was hit with a small, yet powerful wave, he did not sustain any injuries.

“He was still shaking all over last night he was so scared, but he’s overcoming it right now.”

Some property and belongings were damaged, but the Howells are just thankful that Lucky survived, unscathed.