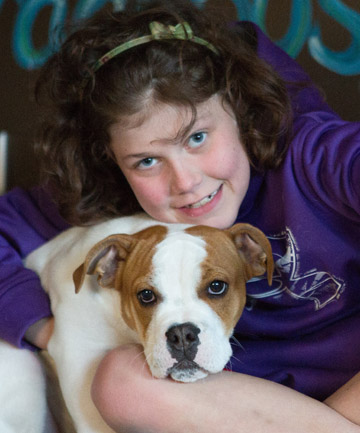 Matisse Reid has spent her entire life battling health problems. All she ever wanted was to be healthy and to have a dog, now she has both.

Matisse Reid has had to endure more than most 12-year-olds. In 2010 she had a stomach, intestine, pancreas and bowel transplant. Up until that point she had not been able to eat because of a rare medical condition called chronic idiopathic intestinal pseudo obstruction. Her bacteria-filled intestine did not work properly so she had to be fed intravenously her entire life.

Matisse Reid spent 6 years and 21 days away from home in New Zealand. She arrived in Pittsburgh, PA in 2007 to begin treatment for her condition and to wait for a transplant. Finally in 2010 the call came that donor organs were ready for Matisse. After a 12-hour operation she had her new organs.

Earlier this year Matisse finally returned home to New Zealand and she now finally has the one thing she always wanted besides being healthy, a dog. Her new puppy Brick is just another indication of how life is beginning to be more normal for Matisse. Matisse still has sick days and doctor’s appointments and Brick is now there to comfort her.

“He’s somebody to talk to when you feel sad and you don’t feel good,” said Matisse. “His tail wags when I come home from school. He’s my best friend.”