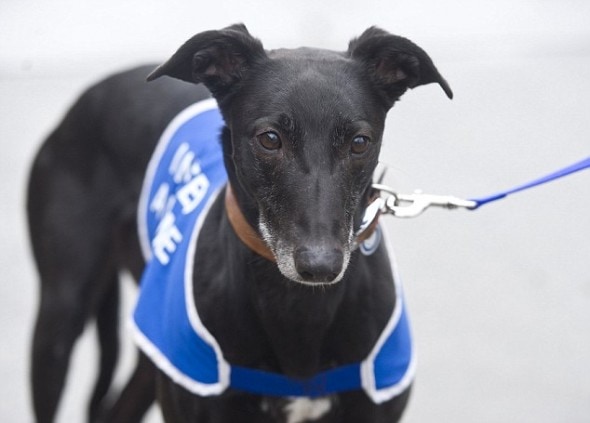 When Shadow arrived at the Battersea Cats and Dogs Home the shelter workers thought he’d find a home fast, unfortunately that wasn’t the case. After 270 days spent at the shelter Shadow finally got the loving home and family he deserves and is no longer the longest resident of the shelter.

Shadow ended up at the shelter because his former owners could no longer care for him. He instantly won the hearts of the staff and volunteers at the shelter and they were all sure he’d quickly find a home. On average dogs spend about 35 days at the shelter before being adopted, for some reason Shadow would far exceed the average stay. He spent two months in a foster home to give him a break from life in the kennels but as the months passed he still couldn’t find a home.

The shelter couldn’t believe it when more than 270 days had passed and Shadow was still at the shelter, so they put out a desperate plea to dog lovers. Luckily Nigel Andrews and his daughters saw that plea on the Battersea Cats and Dogs Home website.

The Andrews had recently lost their greyhound and were looking for a new dog, when they saw Shadow’s story they instantly knew he was the one they were looking for. They weren’t sure they’d get him though. “Shadow had so much publicity we honestly didn’t think we stood a chance of getting him,” said Jess Andrews. “He really is the perfect dog and we can’t believe he was at Battersea for so long.”

The staff at the shelter is just as thrilled as the Andrews family. “Everyone here is so pleased that Shadow has found such a great family,” said Rob Young, head of re-homing at Battersea. “It’s sad when dogs are with us for so long, and although our staff and volunteers do everything they can to make a dog’s stay as happy as possible, nothing can substitute for a loving home and Shadow has certainly landed on his paws with the Andrews.”