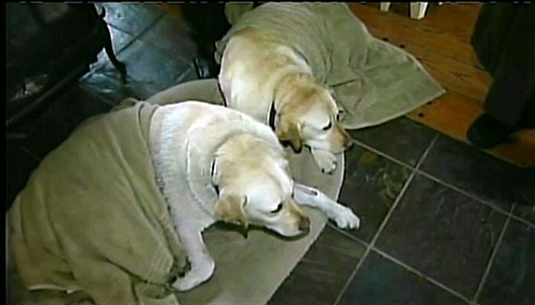 The unquestionable loyalty of dogs is proven once again by a yellow Lab who has another dog to thank for his life.

An icy swamp located in a rural area of Topsfield, MA, proved too tempting for Labs Fred and Ginger. The water lovers were playing on the ice when it let go, leaving the pair stranded in life threatening cold water. Ginger somehow managed to pull herself to safety, but Fred was trapped, front paws clinging to the ice, his body immersed.

Ginger did the only thing she could to help her endangered pal, standing at the water’s edge and barking until she attracted the attention of nearby hikers. When a few of them arrived and noticed Fred they called 911 for assistance. Ginger then hurried home to alert her family.

“She must have gotten someone’s attention…because she kept barking and barking, and then she came home and I knew something was wrong because she was soaked,” said Omar Giraud, dog owner. 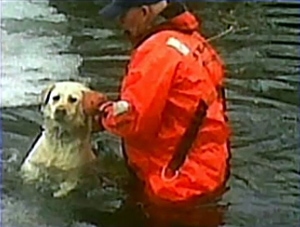 Firefighters arrived and realized that Fred was fading fast. “It actually looked like he was slipping a little bit further,” said Captain Darrell Moore, who was wearing a cold water wetsuit when he jumped into the swamp to retrieve Fred. “The water was cold. The suit had a little hole in it. Trust me – the water was cold,” said Moore.

Moore made his way to Fred and pulled the exhausted dog from the water, carrying him to safety. After Fred was warmed up he was returned to his grateful family, who say they have Ginger to thank for his survival.

“Right now I’m just really happy he’s home because I couldn’t imagine having to bear this news to my children,” said Giraud.