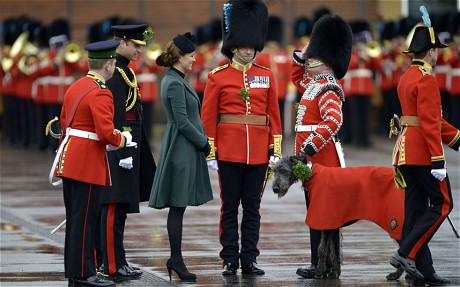 In honor of St.Patricks Day the Duchess of York presented traditional sprigs of shamrock to officers and guardsmen at Aldershot Barracks, and one special canine got to join in the fun. The dog, an Irish wolfhound named Domhnall, was carrying out his first public engagement as a member of the regiment.

Domhnall wore a smart scarlet cape that matched the tunics of the soldiers, and he was led over to Kate by his handler, Drummer David Steed.  Kate ceremoniously attached the sprig to his silver collar.  The tradition of handing out the shamrock sprigs is centuries old and was started by Queen Alexandra, the wife of Edward VII, in 1901.

Dohmnall has been training to take the place of Conmeal who was the beneficiary of the shamrock from Kate at last years event.  Conmeal, who is now 6 years old  was recently retired.  Irish wolfhounds have been the official mascots of the regiment since 1902.  The Irish Guards are the only Guards regiment permitted to have their mascot lead them on parade.  Originally, the mascot was in the care of a drummer boy, but is now looked after by one of the regiment’s drummers and his family.

Kate is known to be a huge dog lover herself and so she saved the best for last, Dohmnall was the last to receive his special sprig from the Duchess and he wore it proudly.