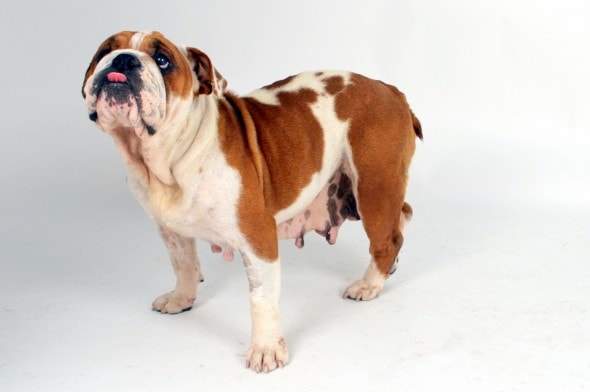 Many times, adorable puppies that get rescued from terrible breeding situations get lots of publicity, but Doris represents the other side of this sad reality: the mother dogs. The mother dogs are too often left behind to continue breeding until they have outlived their ability to make money.

Doris, a four year-old bulldog, was in bad condition when she arrived at the San Francisco SPCA. She was a breeding dog who, like many bulldogs, could only deliver puppies via C-section. Having delivered multiple litters in her short lifetime, she had received stitches many times over and the ones from her last surgery had come undone.

Presumably, when this complication occurred, she became too much of a hassle and expense and so she was dumped in favor of a younger breeding dog. Because she was not a young, fresh puppy, it did not seem like it would be easy to find her a new home and a new life.

After several days in the San Francisco SPCA’s veterinary hospital, Doris thankfully made a full recovery. Once she started to heal, her true personality began to emerge. Despite everything that had happened to her, Doris turned out to be very affectionate, loves people and wants nothing more than to cuddle!

Fortunately, it was not so hard to find Doris a forever home in the end. She is now experiencing what real love after only knowing what it was like to be used.  She can now look forward to daily play sessions, afternoon naps and lots of snuggles!