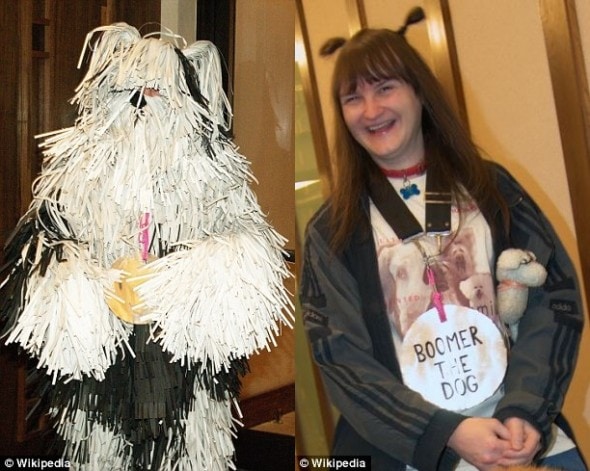 File this under news of the weird: Pittsburgh resident Gary Matthews believes he is a dog trapped in a man’s body. He frequently wears a dog costume, eats dog food from a bowl on the floor, and tried to have his name legally changed to Boomer the Dog.

Loving your dogs is one thing, but actually trying to become one is another story. Meet Gary Matthews (aka Boomer the Dog),the man who has believed he is a dog since childhood. His alter ego emerged after watching the NBC show “Here’s Boomer” as a child, and felt the transformation take place on a hot day in 1979 when he laid on the basement floor to cool off.

“I had this waking dream of actually transforming into a dog. It felt like I was stuck in the floor because I was really into the whole emotion of changing into a dog,” Boomer said. “And I laid there for like 15 minutes, thinking about how I would break it to my parents about how I had transformed. It was like, wow, that was a turning point moment for me.”

The change was not just a mental one. Boomer started referring to himself by his dog name, he created a costume out of strips of paper, he eats dog food and drinks from bowls on the ground, and sleeps in an indoor doghouse. He says the bed in there is much more comfortable than a human bed.

When the unemployed IT technician is not dressed as a dog, he ties his hair up to form ‘ears,’ and dons a collar. He carries a squeaky toy with him when he leaves his home.

Recently, Boomer was featured on National Geographic’s Taboo USA, documenting his daily activities, which include strolling through the neighborhood and barking at other people and dogs.

Not everyone is accepting of his choice to live as a dog. In 2010, he filed to have his name legally changed to Boomer the Dog, but the judge declined his request, stating that the change could “put the public welfare at risk.” Allegheny County Judge Ronald W. Folino said it could cause “confusion in the marketplace,” which would pose problems should the man ever witness a crime.

“Consider the following example,” Judge Folino wrote. “Petitioner witnesses a serious automobile accident and telephones for an emergency medical response. The dispatcher on the phone queries as to the caller’s identity, and the caller responds, ‘This is Boomer the Dog.’ It is not a stretch to imagine the telephone dispatcher concluding that the call is a prank and refusing to send an emergency medical response.”

But Boomer’s friends and family seem to accept his decision and call him by his chosen name. He is still waiting to meet the right female and fall in puppy love.