Buck-O is Scott Clare’s furry best friend.  When Scott’s wife passed away, Buck-O not only filled a huge gap in his life, but taught him it was okay to love again.  So when it came time to get Buck-O fixed, vets noticed something wasn’t quite right, and Scott knew something had to be done, and quick. 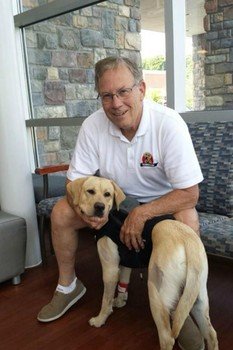 Buck-O is actually named after baseball player Buck O’Neil and is 14-months-old.  Scott took Buck-O to doctors to be neutered, and it was discovered that Buck-O had an abnormal heartbeat.

Buck-O was given a diagnosis of ventricular tachycardia.  It’s not something commonly found in dogs, but can be deadly.  This put Scott in a very difficult position, and left him with a tough decision to make.

“So my choices were spend a lot of money, or hang on to him until he has a horrible death, and I wasn’t going to do that,” said Scott.

Scott didn’t exactly have a ton of options to save Buck-O.  He found out that there was a hospital in Cincinnati, Ohio where Buck-O would be able to get the lifesaving surgery needed.  He would undergo a ventricular ablation.  This is an extremely complicated surgery, and had never been performed on a dog before.

Scott loaded up his car, grabbed Buck-O, and drove the 2,300 miles to Cincinnati.  Scott and Buck-O made many new friends along the way.

“I think they liked the story, the story of him being the first ever,” Scott said.  “And, you know, look at that face.  He’s got such a beautiful face.”

It was a long drive, and even though many friends were made, Scott was still very nervous for his friend.

After an eight hour surgery, and over $10,000 later, Buck-O made it through his surgery just fine.  He is feeling better and resting comfortably as the first dog to ever go through this surgery.  Scott is just happy his best friend will be okay. 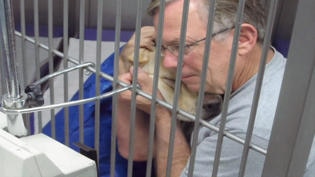