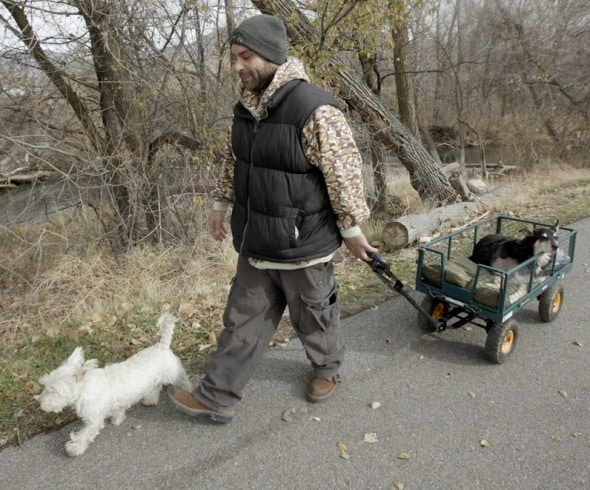 When veterinarian Dale Smith met Marc Payet and his three-legged German shepherd mix Willie he couldn’t refuse them help. Willie had broken his right front leg, the only leg he had on that side of his body. Even though Payet couldn’t afford the surgery Smith helped him out and performed a complex surgery on Willie the day before Thanksgiving. Now Payet is hoping to pay the veterinarian back.

Payet is a former New York animal control officer who came west to Ogden, Utah with his rescue dogs two years ago. He wasn’t looking to get another dog until he saw a flier for Willie at a local thrift store that raises funds to help animals in need. Payet couldn’t resist Willie who was a mirror image of his other dog Blueberry, who also only had three legs. Payet knew that three-legged dogs have harder lives and he wanted to help. When he drove to see Willie he found him tied in the front yard, malnourished and he looked like he possibly had been abused. He couldn’t even get an answer on how Willie lost his leg. “The people told me they were moving, and they planned to ditch on the rent and leave the dog tied on the property until the shelter came.”

Payet took Willie home to live with his other dogs Blueberry and Shorti. They helped him put weight on and build up his strength. Payet and his pack of dogs were living a good life until October of this year when Blueberry passed away from cancer. “I was sitting in my yard crying the next day, when I heard a thump,” Payet said. “Willie had never learned to walk correctly on three legs. He lost his balance, and his leg had broken.” Payet used his rent money to pay for Willie’s surgery.

Only a week after the surgery Willie’s leg broke again, right below the first repair. “People told me I should euthanize Willie,” Payet said. “Willie doesn’t deserve to die. He’s got a quality life ahead of him. He just needs a break. We all need a break sometime.” Willie was in need of a big break. Payet didn’t have the money for surgery and Willie couldn’t get around with only two legs. Payet used a wagon that he had used to take Blueberry on walks in her final days to take Willie on walks with Shorti. “He wants to get up and go so bad,” Payet had said last Tuesday, “You can see it in his eyes. He’s not ready to be done.”

Payet was referred to Dale Smith, who is an orthopedic veterinarian in Salt Lake City. Payet was upfront with Smith and told him he couldn’t afford the surgery. Initially, Smith didn’t think he’d be able to help him. “As I listened to Marc, there was just something so genuine about him and his love for his dogs. It really gave me pause,” said Smith. Payet’s love of his dogs has touched many others that have encountered him and his pack. A homeless family was so touched by Payet and Willie’s story that they offered to give their last $5 to help get Willie’s leg fixed.

Last Tuesday Smith surprised Payet when he agreed to do the surgery even with no guarantee of payment. “It was a Thanksgiving miracle,” Payet said. Smith had to perform a difficult surgery on Willie, using two different strengthening systems to stabilize Willie’s leg. Willie is now recovering from the surgery and Payet is paying all the money he can spare to pay Smith back. The remaining bill stands at $2,500. Anyone wishing to help Payet pay Smith back can send a check specifying the donation is to help Willie to CAWS, P.O. Box 160554, Clearfield, UT 84016.