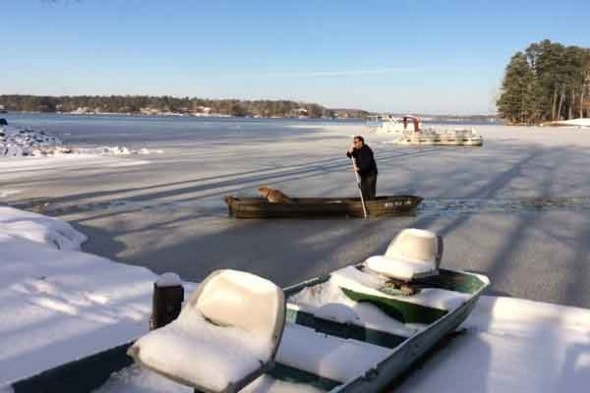 Last week a dog was in danger of drowning after falling through the ice of a reservoir in Virginia when a nearby business owner came to his rescue.

A dog was walking on the frozen Swift Creek Reservoir last week when he fell through the ice. Dan Butler runs a photography studio nearby and his co-worker informed him about the struggling dog. Butler quickly went into action.

Butler found a boat that wasn’t chained up and used it to make his way out to the dog. As he was working his way out he could see the dog starting to grow tired. Butler made it to the dog in time and pulled him safely onto the boat.

When Butler and the dog returned to shore police took the dog and warmed him up in the back of their car. They then took him to a local vet to be checked out and the dog was later reunited with his owners.