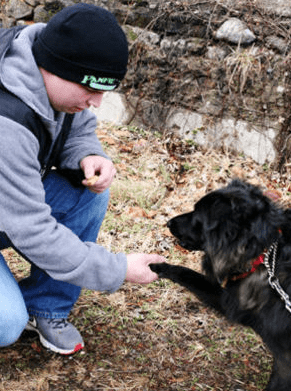 Mocha was missing for three weeks when a stranger came to his rescue. Mocha had become caught on a guardrail along Route 78 in New Jersey when Ryan Muentnich pulled over to help. Muentnich not only rescued Mocha from the guard rail but reunited the dog with its family.

The Rollet family were headed on a skiing vacation for the Christmas holiday when they dropped Mocha off to be boarded on December 20th. Their plans to leave for their vacation were cancelled when they got news that Mocha had run away from the facility that night. A handler had been walking Mocha when they slipped on the ice. Mocha jumped a 4-foot fence and took off.

The Rollet family immediately began searching for their beloved dog. They posted on Facebook and utilized the Facebook page “Lost and Found Pets of New Jersey.” The postings received hundreds of shares and soon phone calls came from people who had spotted Mocha.

For three weeks the search was on. Finally on January 10th Mocha was found, but by someone who didn’t even know about the search.

Ryan Muentnich was driving on Route 78 west when he spotted saw a dog stuck on the guardrail. He pulled his truck over to help. Ryan sat with Mocha until the dog calmed down and then helped free Mocha. Once he had Mocha he checked the dog’s tags and got in contact with the Rollet family.

Once Muentnich got in contact with the Rollet family he agreed to meet them and waited 45 minutes for them to arrive from their home for the long overdue reunion.

“As soon as Mocha saw me he jumped into my arms crying,” said Susan Rolle. “I jumped into Ryan’s arms crying. It was an unbelievable ending to a long, long, three weeks.”

Mocha had survived several cold winter storms over the three weeks. Despite the harsh conditions he was in good health. He is now back at home and settling into his old routine.