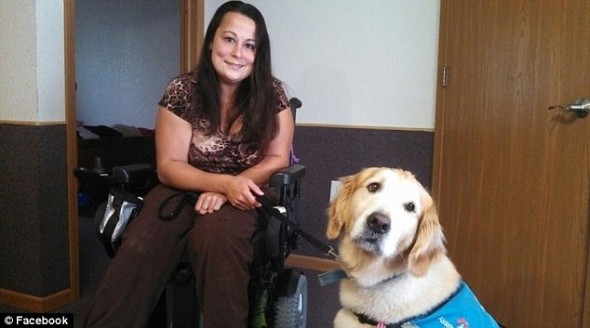 A man in Ohio has been sentenced to two years in prison for trying to steal a service dog from a woman with cerebral palsy in July.

Arrica Okenka was riding a bus in Toledo, Ohio when a man tried to steal her service dog Ingrid. Okenka held tight as the man tried to yank Ingrid’s leash away from her. After a few unsuccessful attempts the man ran off the bus. Okenka held on so tightly while the man pulled that her hand became cut up.

The acts were all caught on the bus surveillance camera. Police posted the video on Facebook soon after the incident asking for the public’s help in identifying the man.

The man was identified as 20-year-old Quincy Matthews who pled guilty to the crime. Judge Zmuda sentenced Matthews to two years in prison on Friday and scolded Matthews for preying on someone Matthew’s perceived as weak.

“You saw how scared she is still,” Judge Zmuda told Matthews. “You caused that, and as you stand before me, I don’t think you care at all. You have a lot of growing up to do.”