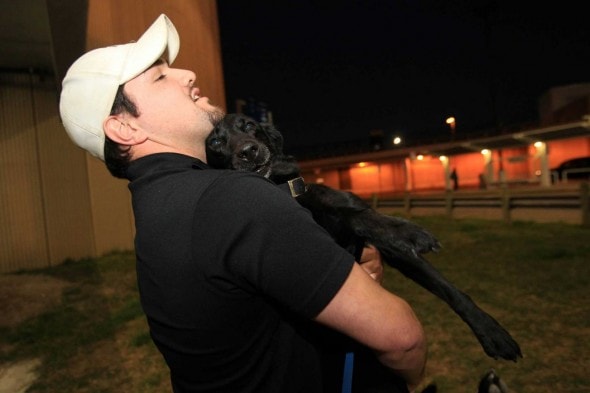 Stephen Heath finished his enlistment in 2011 and had to say a difficult goodbye to his bomb dog Ivy. She still had three more years of service, but Heath made a promise to adopt her when she retired. This week that promise was fulfilled when the two were reunited and Ivy went home with her former handler.

Heath still remembers the day he was paired with Ivy. The marine had been eyeing the bigger, male dogs.

“Ivy was the smallest dog – and a girl!” said Heath.

He soon realized just how talented the small little girl was. For seven months she helped protect Heath and others. She found four roadside bombs, three of which were active.

“She was my companion, my best friend, and she protected me, too,” said Heath.

The pair spent all their time together. They slept together, ate together and even watched movies. In 2011 Heath completed his enlistment and Ivy went on to serve with another hander. Heath made sure to contact Ivy’s new partner and tell him what a special dog he was getting. He also vowed to adopt her when she retired.

After years of waiting Heath finally got the call in January he had been waiting for. Ivy was retiring and they wanted to know if Heath still wanted her. Heath gladly agreed, but soon found out it would cost $700 to transport her to Houston. He was willing to come up with the money, but then the nonprofit Mission K9 Rescue stepped in and fundraised the cost in less than 24 hours.

Kristen Maurer of Mission K9 Rescue accompanied Ivy to Houston for the reunion. At Hobby Airport Ivy and Heath were finally reunited and the two went home together to relax and enjoy their civilian lives together.

1 thought on “Marine Reunited with His Bomb Dog”