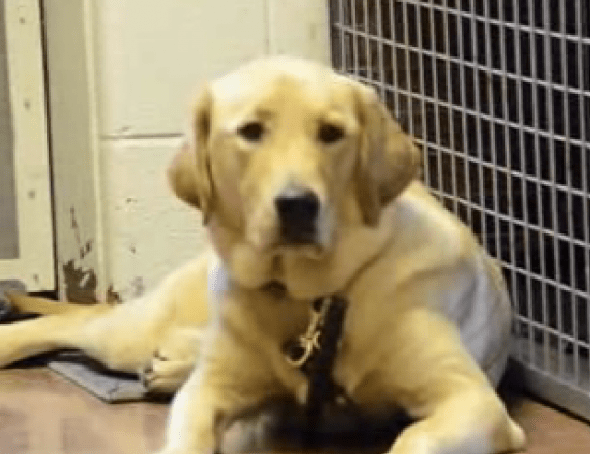 The Maryland Correctional Institution in Hagerstown graduated its first class of trained service dogs that will be given to wounded veterans. The dogs were trained by inmates, who had a difficult time saying goodbye to the dogs.

Kent Brewer developed a strong bond with a Labrador retriever named Trooper. For a little over a year Trooper has boarded with Brewer and spent almost every hour of everyday together.

The program began in March of 2012. It is a donation-funded partnership between the state correction department and America’s Vet Dogs. Each dog spends about a year with an inmate being trained. Officials at the prison say inmates make great trainers because of the unlimited time they have. In order for an inmate to be selected for the program they cannot have had disciplinary adjustments in their level of supervision for a year or any incidents of assault, weapons or fighting for two years.

The program has had a huge impact on the inmates that are involved, like Brewer. Leading up to Trooper’s graduation Brewer spoiled Trooper and prepared for the difficult goodbye he knew was coming. Brewer has been in prison for almost two decades and the impact Trooper has had in the last year on him is significant.

“Before his arrival I spent the past 18 years in a kind of self-imposed isolation,” Brewer wrote in a speech he planned to read at the graduation. “Before I was alone, now I have a best friend – a kindred spirit…who truly needs me.”

Terry “Tree” Dorsey is also in the program, and though his dog Delta has yet to graduate, watching Brewer have to say goodbye to Trooper was difficult and made him realize how difficult it will be when Delta has to leave.

Before the program Dorsey kept mostly to himself and remained quiet and lonely in prison. When he got Delta things changed. He took on a fatherly role for the dog. He took the time to mix different foods to get Delta, who had a finicky appetite, to eat. When Delta got sick with worms Dorsey stayed up with her at night. He was even teased when he crawled into her crate to comfort her when she was crying and couldn’t sleep.

Dog’s like Delta and Trooper have given the inmates a purpose and a sense of accomplishment. It is also impacting other inmates who aren’t yet in the program. There is a waiting list to get into the program and those men are on their best behavior hoping to make it in. One inmate even renounced his gang so he could be part of the program.

The dogs will go on to more advanced training once they graduate before being assigned to a vet that is in need of their service. Meanwhile inmates like Brewer will prepare to train a new puppy. Brewer knows it won’t be the same as his first dog Trooper.