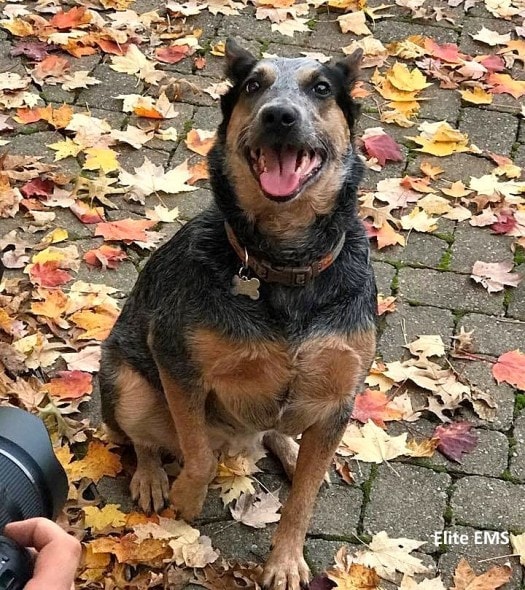 When an EMS team arrived at the home of a man who had died, they were told by firefighters not to approach the dog he had left behind, describing her as mean.  The man’s family members didn’t want her and were going to have her put down, but she was sweet to paramedics, who took her to the station, and now Hope has a home with the team and a best dog friend who also lives at the station.

Firefighters were the first to arrive at the home of the deceased Pennsylvania man, and weren’t very well received by the Australian cattle dog on the patio. 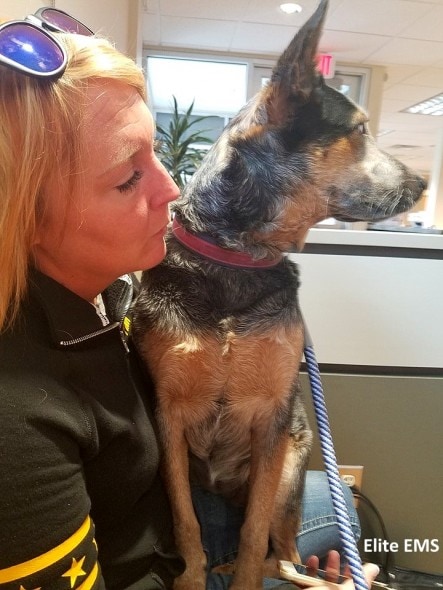 “Don’t go near her. She’s mean and doesn’t like people,” is what Courtney Ivan of Elite EMS was told.  But that couldn’t have been further from the truth – the dog ambled right over to her and her partner.

“She was very friendly,” Ivan told The Dodo. “She let us pet her, touch her and hug her. She followed us around the whole time we were there.” 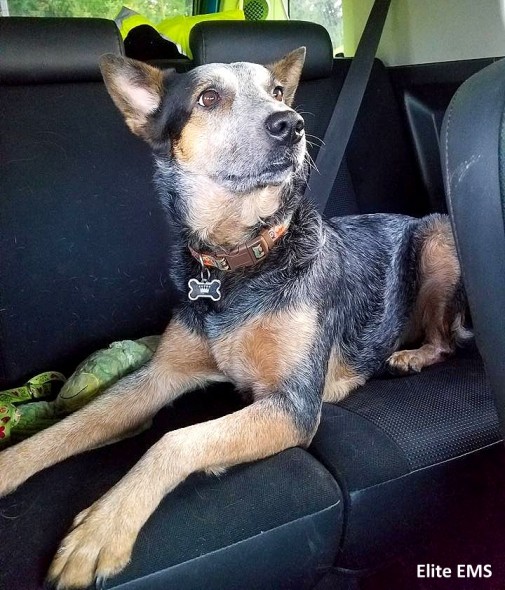 The dead man’s family wasn’t even aware that he had a dog, and they didn’t want her.

“I think just out of pure shock, they said, ‘Well, we’re just going to euthanize her today, then,’” Ivan said.

But the paramedic, who is a volunteer for the Humane Society of Mercer County, refused to allow that to happen.  So she asked the relatives if she could take the dog back to Elite’s station, and they said yes. 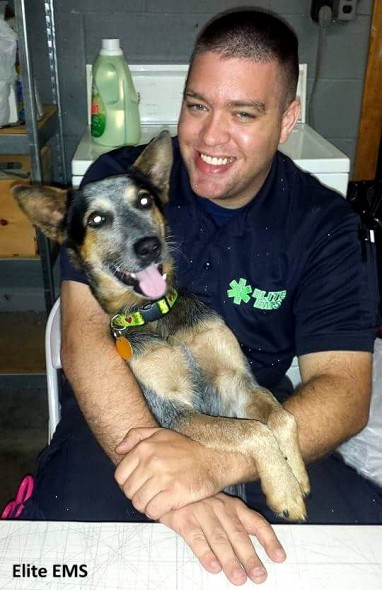 The station is open all the time, and with a 30-person crew, there are always workers around.  The facility already has one canine resident, a dog named Humphrey who had been rescued from a nearby shelter.

They planned to just foster the new girl, whom they called Hope, until a home could be found for her.  But Humphrey and the team all fell in love with her, and her living arrangement became a permanent one within hours of her arrival. 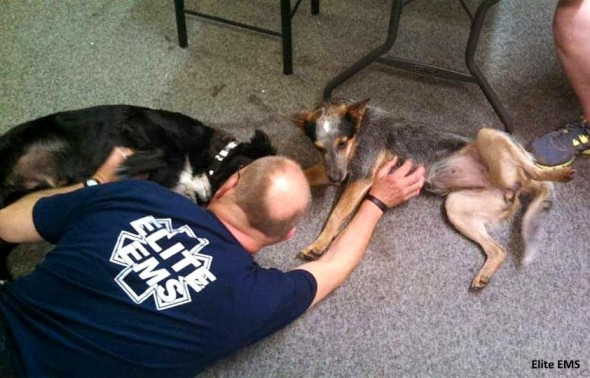 “The first night, the crew was lying on the floor with her, trying to build trust,” Ivan explained. “I came back after my 24-hour shift at another station, and there were matching dog beds for her and Humphrey, and toys and treats. They were amazing with her.”

But soon after Hope was settled in, staff noticed that her front right shoulder was dislocated, and a vet visit revealed that a ligament in the shoulder was torn and she had numerous fractures in her elbow.  Though no one can say with certainty, the vet believes her injuries are due to abuse. 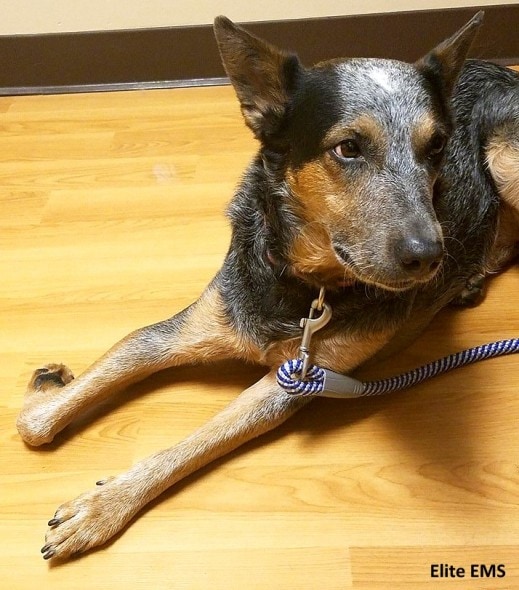 She was given pain medication, but the severity of Hope’s injuries meant that there was little that could be done for her surgically.

“The way [the vets] explained it, her shoulder was ‘free-floating’ in there,” Ivan said. “It ended up being a ball and chain. But taking her leg was a huge decision for us to make.” 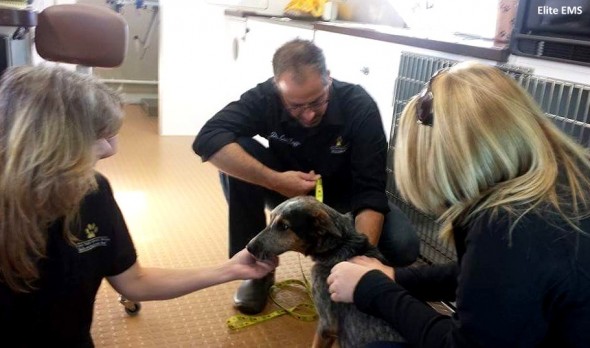 However heavily the decision weighed upon them, after Hope recovered, it was quickly apparent that they had made the right choice.  While losing a limb would be a challenging setback for most, Hope embraced life as a tripod.

“She still lies on the table in the garage all the time, or on chairs in the garage, where the ambulances are,” Ivan said. “When they say that dogs are born with three legs and a spare — absolutely.” 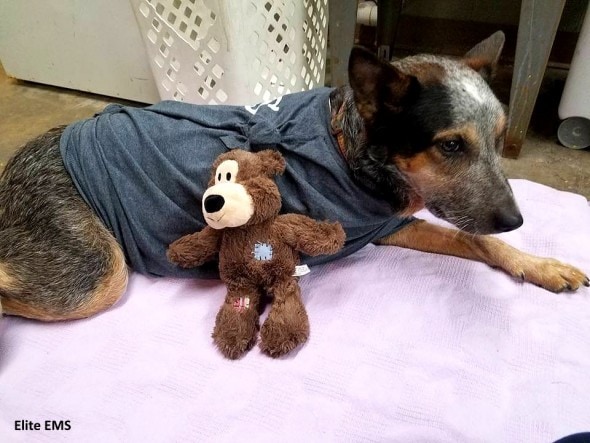 Humphrey had missed Hope while she was away, and was overjoyed to have his friend return to the station.

“When she had surgery, she was gone for two days,” Ivan said. “In some respects, I think he liked the extra attention. But he kept going and checking her bed. When she came back to the station, he was just ecstatic to see her.” 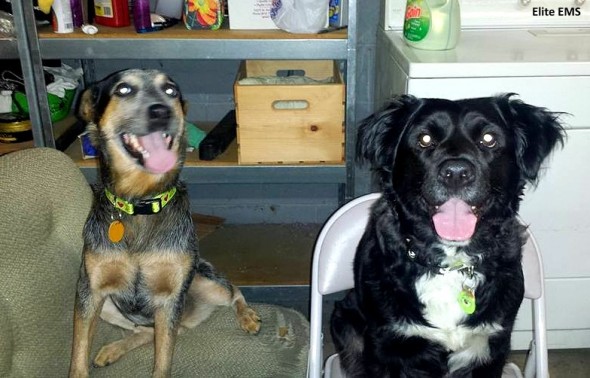 Never were there two closer peas in a pod.  It seems that Hope and Humphrey endured the trials of their respective pasts because they were meant to be together.  They even gang up on the medics.

“We have a bedroom for our crew for overnight,” said Ivan. “The dogs totally kick the crew out of the bedroom — it’s like the dog room. They rule the station.”

But of course, it’s all in good fun.  The people have homes to return to when work is over, but the station is the dogs’ home, so it’s only right that they get first dibs on the beds.  And Hope truly loves her human family.

“She lies right on top of you sometimes,” Ivan said. “She is next to somebody all the time.” 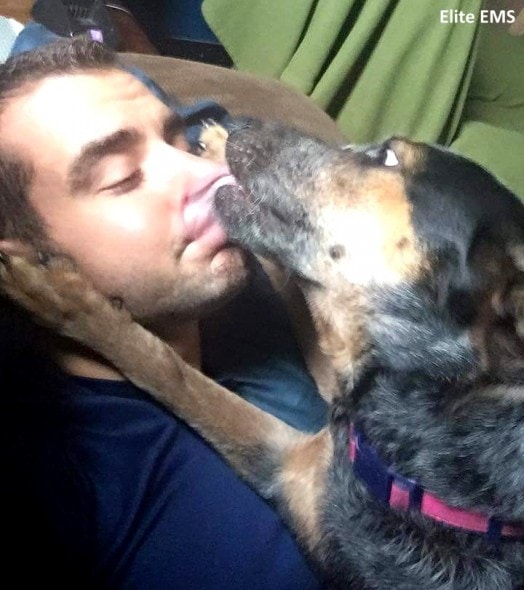 This dog, mistakenly thought to not like people, is an example of how wrong first impressions can be, and serves as an inspiration to Ivan and other crew members.

“Hope is amazing.  I could go on about her all day long, every day. She’s awesome.” 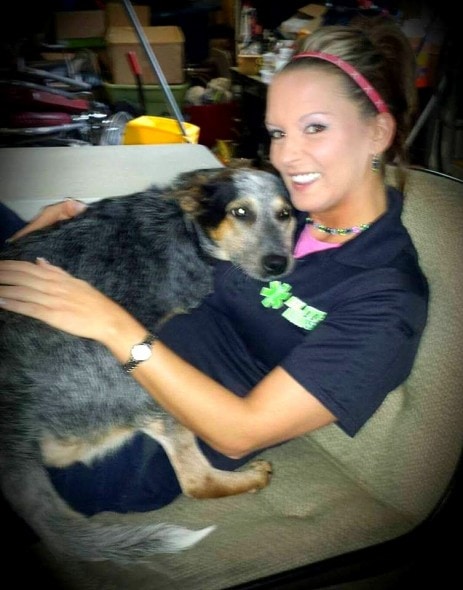