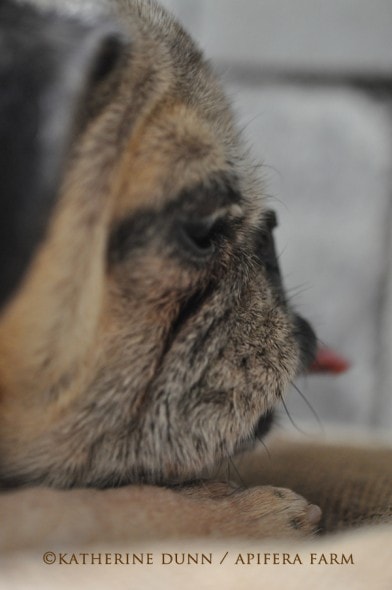 I often hear people say how rewarding it is to live with an old dog, but none seem to share specific examples as to why they find it rewarding. As The Old One Eyed Pug nears fourteen, I’ve been pondering how I can share in words why I find the reward outweighs the constant care taking.

His birth name was Billy Baker, named after my kindergarten friend who had a buzz cut that reminded me of Billy’s soft, round head.  But fate gave Billy Baker, the pug not the boy, a name change after one eyeball became wounded and had to be removed. It happened after a complete misunderstanding with a then very young chocolate lab, but the incident did not alter their loving relationship. To this day, Huck licks the little pug’s smooshed in face like a lollypop.

I like to think of his lost eyeball as the full moon watching over my little fellow and shining a light his way to keep him from running into walls. If I’m sitting on the porch with pug in lap, gazing on a full moon, I give him a squeeze and say, “There’s your eyeball, watching over us.”

We thought we were going to lose him a year ago when he appeared to have a mini stroke and lost coordination for a few days. He was off food, tail down, humped back, and we rushed him into the vet. Ex-rays showed deteriorating spinal disks and together with his bad heart, we figured our days together were closing in on us. But he rebounded.

Most of his teeth have been pulled but he still manages to eat like a running back, making one thing the same as in his youth- gas. Ah yes, the gas he doeth pass. Over the year, he sleeps more, and he is so deaf that he doesn’t know if someone is in the room. He goes into deep sleeps and if I try to gently shake him awake, he still lays snoring for minutes until he comes to life. His one remaining eyeball is nearly all fogged up in blindness making stairs or new territories a challenge.

He needs constant guidance now to get around the house. If we are in the kitchen, and I leave for the downstairs studio, I tap him and he knows to follow, but then he needs assistance on the stairs. If I can get him to settle on his fire side bed, he will sleep for most of the day. But  it takes him longer to settle, and he often wanders around looking for me, or something that feels right. he often seems a bit delirious, like an old man wandering, looking for the reason why he got up in the first place.

Out in the garden, the old pug can still sniff around a few minutes before he starts to cry a bit- “Where are you?” he’s asking. “Do you know where I am? Because I’m not so sure where I am, come find me.”

He used to love spending hours in the garden. But now he’d rather be in my lap, my hand on his worn down spine, his little pug nose snoring in and out with an occasional twitch from his singular eyeball.

And there in lies the answer.

I still provide a shore for him, a respite in his delusion brought on by age. He gives me one more purpose in my day – to give him a safe place to be all that he can be even in his elderly limitations.

We fit together like salt and pepper. I have a nice warm lap that has been reformed over the years to fit his little curled up fawn body just perfectly. 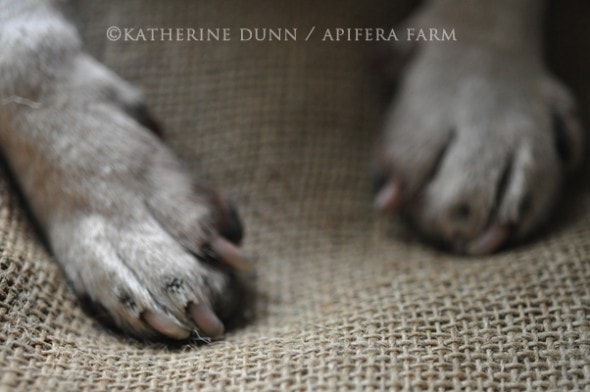