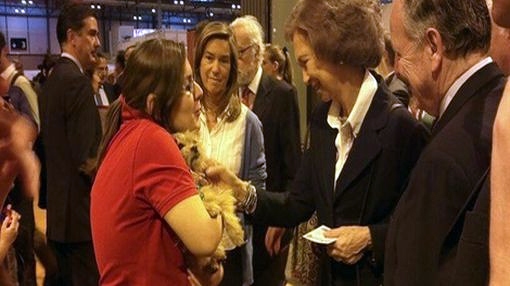 Known for her philanthropic efforts, Spain’s Queen Sofia has turned her focus to animals, or more specifically, one very lucky Spanish dog.

Over the weekend, the Queen visited Madrid’s Companion Animal Fair. She was in attendance to receive an award from the College of Veterinarians, but somewhere along the way she became sidetracked. While touring the facilities she became distracted by a dog. She stopped to pet it…and fell in love.

According to ElComercio.pe, the 3 year old dog is a mutt.  He was left for dead on the street by a group of vagrants in April. Now his new, very different life begins at Zarzuela Palace – Queen Sofia adopted him, and this fortunate former street dog is now royalty.

The Palace press liaison has not yet released the new name of the dog.