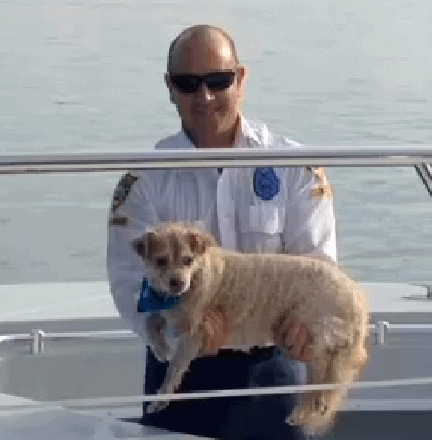 Frankie escaped from him home Monday morning. Somehow the blind dog ended up in Biscayne Bay swimming for his life.

Johanne Poirer was the first to spot Frankie by her home in the Venetian Islands. She and her husband tried to rescue Frankie themselves.  They managed to get Frankie on their boat, but he quickly jumped back in the water again. Poirer was determined to make sure Frankie was safe, so she called police for help.

“I approached the dog slowly,” said Canete. “I didn’t want to spook it away, and it immediately came swimming to the boat so it made it easy for me to lean over the boat and grab it and retrieve it from the water.”

It is estimated that Frankie was in the water for over an hour before Officer Canete was able to rescue him. Frankie’s microchip helped bring reunite him with his family, who was relieved to have him home again.