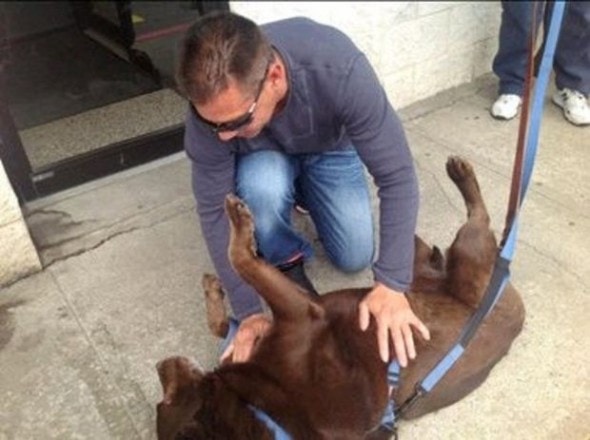 For eighteen months Ralph Vega’s chocolate lab was missing. He never gave up hope that he one day would find him again. Earlier this month Vega finally got the reunion he had been hoping for when his dog Sir Cocoa was found with the help of a microchip.

On November 16, 2011 Sir Cocoa escaped from Ralph Vega’s yard. Vega immediately did everything he could to find him. He posted flyers everywhere. He notified shelters, vets, hospitals and the police. He even set an Amber pet alert.

“Every time I saw a chocolate Lab, I had to stop, go up to the dog (and greet it), to be sure it wasn’t mine,” said Vega.

As the month passed there were no sighting of Sir Cocoa, but Vega refused to believe that he wouldn’t find Sir Cocoa one day.

“I kept saying that I knew he was still alive,” said Vega.

On May 6th of this year two women came into the Bay Street Animal Hospital in Rosebank with a chocolate Lab they had found. The animal hospital did their routine, and immediately first checked to see if the dog had a microchip. The check with a wand revealed a chip, and that the dog was Sir Cocoa.

Vega was in shock but thrilled when he received word that Sir Cocoa had finally been found after so many months. He quickly drove to the animal hospital for the reunion he’d been hoping for. There were licks and tears as Sir Cocoa and Vega finally saw each other again. Vega is so happy to have him back thanks to the microchip.

“He’s been gone for one-and-a-half years, and I got him back because of the chip,” Vega said. “If you love your dog, get a chip.”