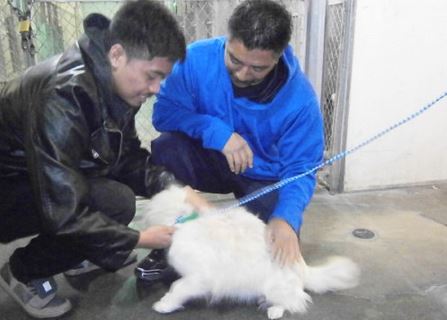 Two years after a family lost their best friend Aka, they were reunited with the 10-year-old American Eskimo Mutt.

In 2011 Aka went missing from the Sao family’s backyard. With two years passing since they had last seen Aka they had given up hope of ever seeing her again. They weren’t even sure if she was still alive. On Tuesday that all changed when Aka was brought to the County of Los Angeles Department of Animal Care and Control. Aka was over 20 miles away from the Sao family, but a quick scan revealed her microchip and she was reunited with her family by dinnertime.

“The whole family was over the moon,” said Evelina Villa, a spokeswoman for the shelter. “It’s always heartwarming to reunite pets with their owners, particularly when they have children.” No one knows where Aka was or what she endured during her two years away. The person who brought her to the shelter didn’t disclose any details about her.  She is home safe now though thanks to her microchip.