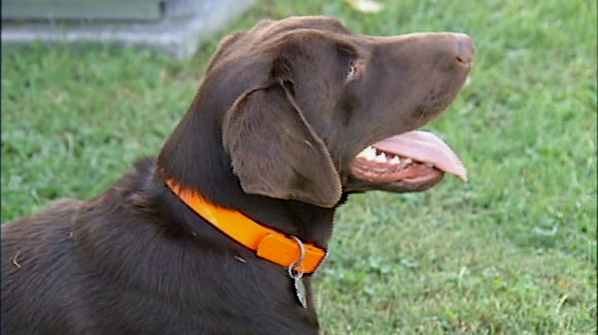 Seventy-four-year-old Gloria Wakefield was doing a bit of gardening and took a hard fall on her lawn.  The Henrico, Virginia resident worried she might spend hours on the ground, but her neighbor’s dog, Cooper, came to the rescue.

Wakefield was pulling weeds and yanked a bit too hard, knocking herself onto her back.  She nearly passed out.  She spent 15 minutes on the grass, calling for help.

“I tried to get up on my own, but I couldn’t. I tried to climb up this pool and I bent it – and then I fell again,” Wakefield explained.

That’s when Cooper heard her cries for help.  He began urgently barking.  The one-year-old chocolate Lab’s owner, Costa Eleftheriou, was doing some work indoors when he heard Cooper barking.  He peered outside and saw Wakefield lying on the ground near her birdfeeders.

“I was just in shock seeing her laying there,” Eleftheriou, said.  “Hopefully she wasn’t laying out there long.”

He got Wakefield on her feet and brought her inside.  It has taken weeks, but she’s recovered from her strained chest and back muscles.

When asked if she thought Cooper was a hero, Wakefield said, “Yes, I do, because I don’t have any men around here that would, you know, help me.”

Her husband passed away a few years ago, and her Yorkie, Buttons, died last year.

If Cooper hadn’t been outside, “I probably would have laid out here forever.  I don’t know.  He just knew I was in trouble,” Wakefield said.

Sudden spills like Wakefield’s happen every day.  Adopting a shelter dog could be a lifesaver to someone living alone.