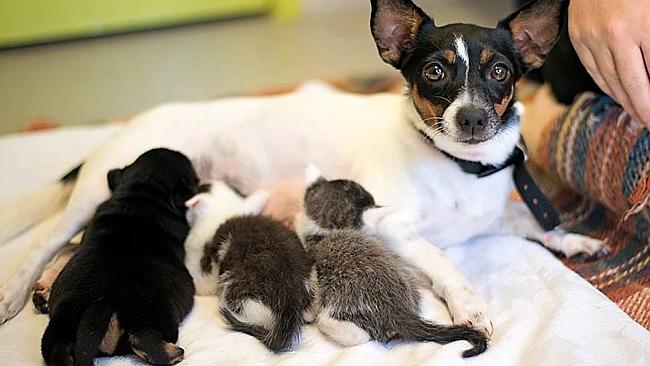 Gigi the Australian Miniature Fox Terrier adopted three orphaned kitten, who she cares for alongside her one surviving puppy.

Gigi had two puppies recently, one of whom died at birth. When the surviving pup was two weeks old, Gigi’s motherly instincts compelled her to adopt the litter of foster kittens when she heard their cries. The kittens’ caregivers had tried to match them with a mama cat, but she showed no interest in them. In contrast, Gigi was unable to rest upon hearing the kittens’ little meows.

“Gigi went to comfort the kittens and ended up feeding, toileting and comforting them much to the kittens’ delight as it filled their empty tummies.”

The kittens will remain in foster care with their doggie mum for at least another month before being made available for adoption through the Beenleigh branch’s rehoming centre.

.
.
Reprinted with permission from our sister publication, Life With Cats.
.<via>