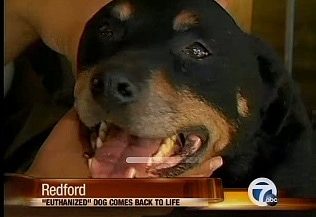 Matt Olivarez had to do what every animal owner dreads – he had to put his dog to sleep. And now he may have to do it again. The Redford, Michigan man took his 10 year-old Rottweiler, Mia, to the vet to be euthanized last Saturday. Spinal problems had progressed to the extent that Mia was no longer able to walk.  Vets recommended euthanasia as a merciful solution to her suffering.

Olivarez was present and watched as both shots were administered to Mia. Moments later the vet declared her deceased. Olivarez brought the beloved family pet’s remains home so that she could be given a proper burial. What happened next defies description.

In an interview with Action News, Olivarez expresses amazement at Mia’s revival, and heartbreak at the thought of having to put her down again.