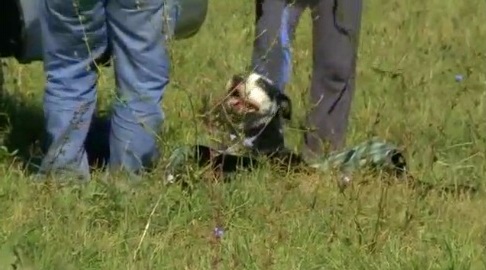 Because of the actions of an animal rescuer who just happened to be passing by, a dog shot by police and left to die in a field for 24 hours has been taken to an animal hospital and is recuperating.

Jamie Case was driving through East St. Louis when she spotted a black and white dog moving in a field. It was injured, but still clinging to life. The executive director of Gateway Pet Guardians and her husband, who often feed stray dogs in the area, managed to scoop the dog up into their vehicle and rush him to Hillside Animal Hospital.

The pit bull had been shot by police after an incident involving an eight-year-old boy, and he was left for dead for nearly 24 hours. It was reported that the wandering dog bit the boy after he had been throwing rocks at him. The dog was crossing a street to a field when he was shot.

“The dog came across the street, and the next thing you heard is ‘pop, pop pop!’” said witness Cynthia Wilson.

Three shots were fired by an officer, two of them striking the dog.

Residents, unaware that the dog had been left in the field to die, were not happy about the way police handled the situation. They gathered to watch as Case and her husband rescue the injured pup. As their outrage grew, police were called onto the scene to calm them down. The assistant chief was upset about the situation, too. 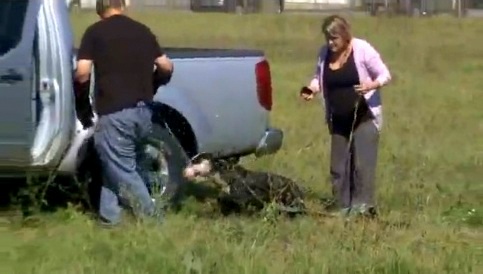 “We should have done something proper. How do we shoot a dog and just leave a damn dog in a field?” the assistant chief barked over his radio. “And you wonder why these people say the s— they say about us.”

The dog, named Colt by his rescuers, was taken to a pet hospital. X-rays revealed a shot to the shoulder and one in his head, but vets do not believe it penetrated his skull. Despite this, Colt still had some pluck in him.

Because his grandmother did not know what happened to the dog, the boy was taken to begin the painful treatment for rabies. Because the dog has been found and can be tested, the boy may be lucky enough to not have to complete the vaccination process.

The search is on for Colt’s owner, as he is microchipped and registered to a home in Belleville, Illinois, about 12 miles away from East St. Louis. But his future at this point is unknown. It seems likely that he will survive the shooting if he was able to make it for 24 hours without medical attention after being shot. But his temperament still must be assessed and he must be cleared of being dangerous.

“He was fighting us to get in the car so he has got some oomph left in him,” Case said. “I am hopeful all those things mean he is on his way to recovery.”