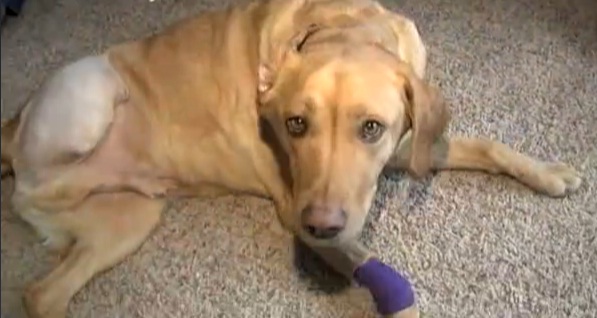 What happened to one family’s dog was tragic, but they say it brought them closer together.  Yellow Lab Maverick went missing from his Minnesota home, and no one had seen him since.

“I got a call from our neighbor who said somebody stopped by his house, and said there’s a yellow Lab who looked like he’d been hit by a car,” said the father of the family.

Maverick went missing two weeks earlier, but he turned up in a ditch nearly half a mile away.  He had indeed been struck by a car, his right hind leg nearly severed.  He was barely alive.

“A big part of it was right here,” said the veterinarian, pointing to Maverick’s head, “his determination.  But the other thing, I think the cold weather really helped.”

The icy temperatures constricted his blood vessels and slowed blood flow, which allowed Maverick to cling to life until he could be rescued.

He did lose his leg, but is learning to live without it.  So far he has managed to hop around the yard pretty well with only three legs, and one of them in a protective boot.

“He’s pretty much back to his normal personality that he had before,” said the family’s mom.