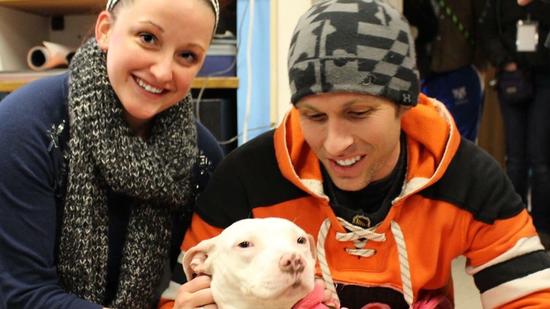 To see our first two articles about Molly, click here, or here.

Some of you may remember our coverage of Molly’s story.  She had been hit by an Amtrak train, and luckily survived the terrible ordeal.  Not only did she survive, but she made a miraculous recovery, and was adopted by the police officer that saved her life.  Now, little Molly has found herself a finalist for the Petco Foundation’s Holiday Wishes campaign.

Molly’s story has put BARCS in a really great position.  Should Molly be the winner for the campaign, she’d be bringing in a grant that could be anywhere between $5,000 and $100,000 made in her name to their rescue group.

Molly’s story went absolutely viral once it hit news and social media outlets.  Her amazing recovery was far beyond what anyone could have hoped for after she was hit.  With that, and the heroics of Amtrak Officer Kevin McMullen in his rescue of the poor dog, it isn’t difficult to see why she’s a finalist.

According to Claire Giambi, Molly’s human mom and McMullen’s girlfriend, “BARCS let Kevin visit Molly while she was recovering. After one of his visits, I asked how she was doing.  As he spoke, his eyes filled with tears, which is something I had never seen him do in our six years of dating.”

“I knew from that moment on we had to adopt Molly.  If she could have that kind of impact on one human being, who knows what else she could do.”

BARCS is actually already a winner.  Just having Molly’s story competing as a finalist is going to get them a grant that will be announced in December.  They are also up for a People’s Choice Award as well.  If you’d like to vote, you can click here for more information.