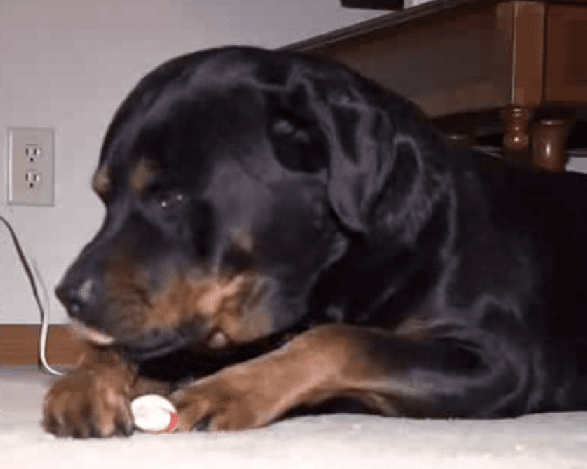 Joe Bellehumeur’s Rottweiler Hooch went missing on New Year’s Eve. After a week of missing in the frigid Milwaukee weather Bellehumeur began to fear the worst. Then Tuesday morning he got the call he’d been hoping for, Hooch was found alive.

Hooch went missing when someone let him out to go to the bathroom. For some reason Hooch just ran off.

Bellehumeur and his friends quickly got the word out about the missing dog. They posted fliers all over the area, got the word out on social media and even got some help from a volunteer group called Lost Dogs of Wisconsin.

As the days passed Bellehumeur began to lose hope that Hooch could survive in such cold temperatures. Then on Tuesday morning some workers were checking for water main breaks and found a dog under a bridge. The workers had seen the missing dog fliers and thought this might be him, so they called Bellehumeur.

Bellehumeur rushed to the bridge when he got the call and was thrilled to see that it was Hooch.

“I’m looking and all of the sudden I see him and I go baby Hooch!” said Bellehumeur. “And then he ran up to me and I just busted out crying.”

Hooch was alive, but the days out in the cold weather had taken their toll. He had lost 25 pounds and had some minor injuries to his paws and mouth from the snow. He is on the mend and recovering safely at home.