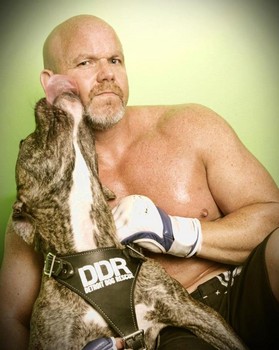 Gordon Shell, a mixed martial artist, got the news from doctors that he would need to stop fighting due to a heart condition. Gordon fought his last MMA fight on September 15th. He is not done fighting though. He may no longer be able to fight mixed martial arts but he is determined to fight for dogs.  Specifically, he is focusing on helping the many homeless dogs in Detroit who are fighting for their lives.

Even though he was told not to fight anymore, Gordon did one last MMA fight on September 15th. All the proceeds from Gordon’s last fight were donated to the Michigan Humane Society. He fought one last fight for those who can’t defend themselves. The funds will be used to raise awareness of animal cruelty and also to support Michigan Humane Society’s free pit bull sterilization program. The program offers free spay or neuter surgery of pit bull-type dogs.

Gordon has two rescue dogs of his own. He has been fighting for the cause of dogs for a while. When the news broke about Michael Vick’s dog fighting Shell was appalled. “It’s a whole different genre when you talk about dog fighting. They don’t choose to fight, and they don’t have referees and they don’t have the option to stop when they are injured,” Gordon said. He was so disgusted he challenged Vick to a fight. Vick never accepted that challenge.

Gordon is also bringing awareness to his fight for the dogs by being part of a documentary, “The Dog Fighter”. The documentary covers his final fight and his work to help the dogs of Detroit. It is planned to be released around Thanksgiving. The proceeds from the film will go to the Michigan Humane Society.