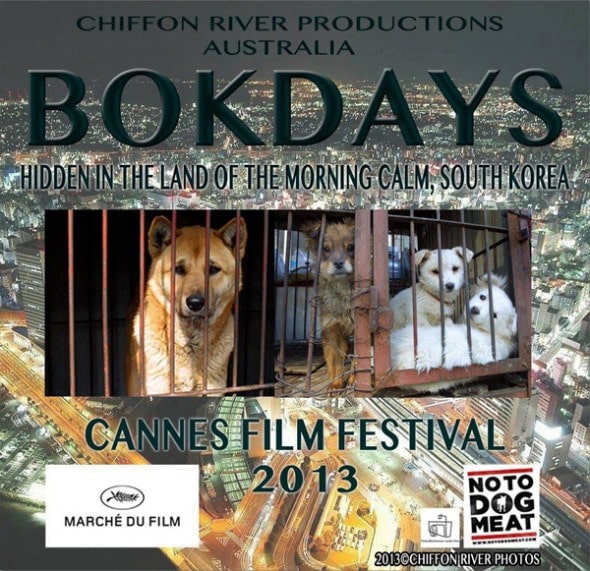 This year, and for the very first time, the Cannes Film Festival will feature a movie portraying animal cruelty. Today, May 18, 2013, the movie “BOKDAYS, Hidden in the Land of the Morning Calm” makes its debut.

This 6-minute long movie, produced by Michele Brown, co-founder of NoToDogMeat and World Protection For Dogs and Cats In the Meat Trade, presents the story of two women who go back to Korea to explorer the dog meat market. Both women knew the trade existed, but never imagined how massive the trade really was. Neither knew the extent of the animal cruelty the dogs and cats endured.

The short films’ last minute is the only time where graphic images are shown. These were necessary to bring to light the cruelty this business places on innocent lives – the animals.

Brown accompanied the woman in their journey and with her video camera recorded every moment. The short movie shows the women’s shocking reactions when their naive disbelieve to the flourishing existence of the dog and cat meat trade in Korea is confronted. The movie shows the barbaric treatment these innocent animals endure during their hour long deaths.

“Dogs are hung, beaten with iron bats, electrocuted in the mouth and genitals, partially drowned and burnt alive before they are boiled and cooked,” said Brown. “Tough meat is a symbol of virility and torturing the animal prior to its death makes the meat tough. There is a certain sexual pride when men see a woman beat a dog, and many times it is women who do the beating while men watch.”

The film shows how the streets are filled with trucks loaded with young animals, how these pets are kept crammed in cages and how the local poachers show no remorse or care towards the way they treat their merchandise – living animals. Some poachers are seen upset, they don’t want to be shamed on camera.

“The dog and cat meat trade is an illegal but legal industry,” Brown told Life with Dogs. “It falls in a gray area that is highly unregulated. People think that eating dogs and cats is a cultural thing there, but it is not.”

Historically, eating dogs and cat was done during war time and famine. During those times drastic measures were needed to stay alive. Outside of these conditions, it was considered shameful to eats cats and dogs. However, in the 1980s dog meat traffickers convinced people that dog and cat meat was trendy, and the demand for dog and cat meat grew. 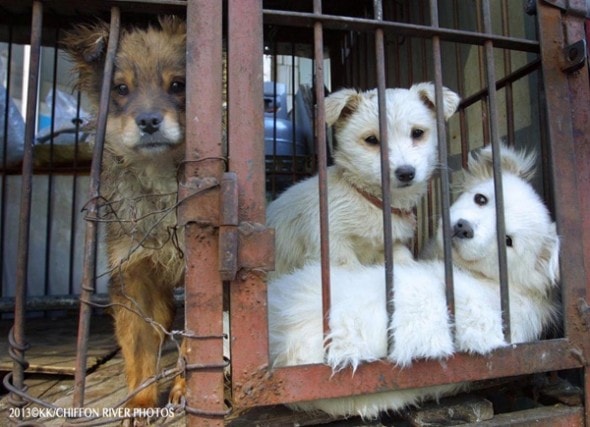 “BOKDAYS” is a short preview of what’s to come. Brown plans to release a longer movie depicting the dog and cat meat trade in Korea as well as in other countries like China and Vietnam.

For now Brown is excited at the opportunity the Cannes Festival is presenting her. With this film she can show people the injustices that happen in this part of the world, and at the same time educate the public on what really goes on in these third-world countries. The movie will raise awareness and Brown hopes to motivate people to do something to stop this cruelty.

“I’m hoping multiple thousand people will see the movie,” said Brown. “I think people will get it and there will be a change.”

Brown and her organization NoToDogMeat are on the ground fighting these injustices day after day. They rescue animals directly from death cages, paying as much as $350 per animal. The butcher usually gets $60 and the rest goes to cover medical care for the animal – vaccines and medication. NoToDogMeat works directly with veterinarians that donate their services. The vets don’t make any money on the rescued animals they treat.

“We could do more if we had more donations or if we had the media machine backing us,” said Brown. “But we don’t. NoToDogMeat is different than other rescue organizations because we are particularly interested in animals that no one intercepts. People donate money to animals that are already saved – in shelters – but no one does anything for those that are traded. We are doing something for the ones that no one is helping,” concluded Brown.

Today marks NoToDogMeat’s world wide awareness day. Over 35 countries have joined the cause and will be participating in peaceful demonstrations across the world.

“BOKDAYS, Hidden in the Land of the Morning Calm” will be available in DVD after the Cannes Festival.

Learn more about NoToDogMeat by visiting their site and Facebook page.