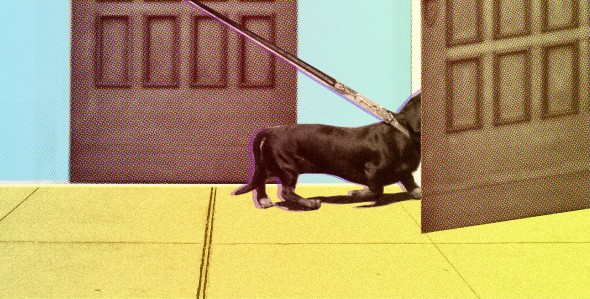 I went to services on Yom Kippur for the first time in I-don’t-know-how-long. I wanted to attend Yizkor, the memorial service, to mourn for Ginger—my dachshund, who had died the previous night.

Ginger was the closest thing I’d ever had to a child; since I work from home, she was my constant companion. She’d been found as a puppy on Interstate 95 in North Carolina, covered in filth, missing a collar. We long thought she had been abused or abandoned, since she went after other animals and was suspicious of many humans, especially repairman types. I admired her precisely because she wasn’t one of those agreeable creatures that loved everyone. She was multifaceted: fierce and hilarious, sweet and stubborn, tough but enamored of her creature comforts. She was beautiful in her long-haired wiener dog imperfections: a goofy cowlick, fur trailing from her ears like peyot, and meaty forearms like Popeye.

She had tremendous presence. She didn’t let anything get her down until the day she couldn’t get up. Then Ginger, who had opened my heart during the more than 18 years she lived, brought me back to Judaism with her death.

Growing up at the Jersey shore, I was a Hebrew school dropout. It was an act of rebellion; but to be honest, my parents had only half-heartedly enrolled me. They didn’t belong to a synagogue, and our Jewishness was mainly cultural—bagels and lox every Sunday. I didn’t have a bat mitzvah.

As an adult, I’m an agnostic bordering on atheist. But there’s no denying I’m Jewish. It’s part of my make-up and baby boomer upbringing. The deli. The humor. Our singular history and heritage.

As a journalist, I’ve sought out reminders of Jewish heritage all over the world. An encounter with Jews in the former Soviet Union, a visit to Theresienstadt in the Czech Republic in the dead of winter, the search for Hitler’s bunker in Berlin. And I’ve poked my head into synagogues everywhere to take a peek. I find the universal link deeply moving.

But sitting through an actual service at home? Never been my cup of Swee-Touch-Nee (the tea of my Russian-Jewish forebears).

I’d attended Conservative services a handful of times, mostly as a child, for family affairs. I found them to be as tedious and oppressive as the itchy tights I was forced to wear. Chanting in some strange language. Religious calisthenics, with all that standing up and sitting down.

Regrettably, I never had any real encouragement to explore what it was all about. Though my parents tried at first to set some kind of religious example, all I picked up on was their dislike for crowds and formalities. That was it for me.

My partner Mitch belongs to a Reform congregation and has always attended High Holiday services without question. But he goes without me. In fact, he typically has to tell me when the Jewish holidays fall, because otherwise I wouldn’t pay attention.

When we made the decision this fall to euthanize Ginger—her hind leg, kidneys, and teeth were deteriorating; she couldn’t stand and was in constant pain—Mitch told me it was Kol Nidre, the start of Yom Kippur.

He talked about Yom Kippur and Kol Nidre, the evening prayer service dealing with the taking of oaths. I didn’t know what he was talking about. All I knew was that the oath we made to Ginger was a very deliberate one: to always do right by her.

For her last meal, we fed Ginger vanilla ice cream while she showered Mitch with the usual kisses. She shook and we sobbed in the vet’s lobby. We felt like we were letting her down. “You’re doing the right thing,” we were told. Honoring your commitment.

I wanted to ask Mitch again about that oath thing and Kol Nidre, but mostly, I didn’t want my dog to die. I wanted to pull out the IV and scoop her up. I wanted to stop the pink liquid from stopping the spirit of a creature that had managed to survive on I-95.

I didn’t. First the sedative. Then the pink drug. Then a stethoscope on her heart that had stopped. We clutched her body as it grew cold, as we kissed the cowlick one last time. Her little tongue was pitifully protruded. But her pain was gone.

Mine was just beginning. Though we were zombies, Mitch stuck to his plan to go to Kol Nidre at his Reform synagogue. He had just enough time to change clothes before services. I stayed home with Ginger’s things.

The next day, though, the urge to flee the new normal of our empty home was slightly stronger than the desire to curl myself into a ball on Ginger’s dog bed.

When Mitch said Yom Kippur memorial services were that afternoon, I thought, for the first time in my life, maybe Judaism could help. So I entered the sanctuary with an open but squashed heart, desperate to find a bigger shoulder to cry on.

We read the prayer Unetaneh Tokef, which posed the questions: “Who shall live and who shall die?” Even though it didn’t say anything about dogs specifically, I gratefully devoured the prayer book, with its offerings on life and death ranging from contemporary poets to Shakespeare.

I approached the rabbi after the memorial service and asked if there were any prayers for dogs. He emailed one that makes me cry, which has something to do with how you heal. It wasn’t handed down through the ages. It was written by some of his congregants for their dog, incorporating things they’d found on the Internet.

I substituted Ginger’s name and read the prayer:

As we say good-bye to our beloved Ginger,
we express our deepest gratitude for the blessing of her sweet presence.
Through Ginger, we experienced joy.
Through Ginger, we learned to think about someone else other than ourselves.
Through this beloved animal, we were shown the best qualities of humankind.
We were shown the greatest gift of all,
the gift of unconditional love.
May we remember to share these important lessons with others.
In sharing them, we will truly honor the memory of Ginger,
and keep her spirit in our lives.

I’m grateful that Judaism was there for me in this time of need. And now that I’d gone to synagogue on Yom Kippur, I started to consider going back another time. A few weeks later, Mitch and I returned to synagogue for a special Friday night Sabbath service dubbed “Pop Shabbat,” with a choir. He was going anyway to see a friend, and the choir part intrigued me.

I loved that this wasn’t the usual button-down ritual. I smiled at the college sweatshirts, exposed tattoos, and the rabbi unintentionally channeling Johnny Cash: a man in casual black.

Another grin as I realized my feet were tapping to the Hebrew music. And the English part of the prayer book encouraging reflection on the past week massaged my mind. Since I wasn’t quite as raw, the Mourner’s Kaddish felt like a big hug. I experienced the same kind of momentary peace I often get from doing yoga or meditation at home.

It was enough to demolish some of those childhood walls. But not all. I’m still not going to be a regular at services.

I’ll never be a joiner. I don’t care for groups, though I adore conversing with this particular Reform rabbi one-on-one. I do have a new appreciation for my religion and am game to learn more if something grabs me.

I may return next Yom Kippur for a refresher with the revised Reform prayer book, which I like so much that I plan to buy one. And to mark the anniversary of Ginger’s death, of course.

My religious outlook is a work in progress. But one thing’s for sure: I intend to keep putting one paw forward every single day.

That’s what Ginger would do. Ginger showed me that intention is the essence of living. Trying so hard to do right by her in life and death pried open my heart more to life, and to what Judaism can offer. 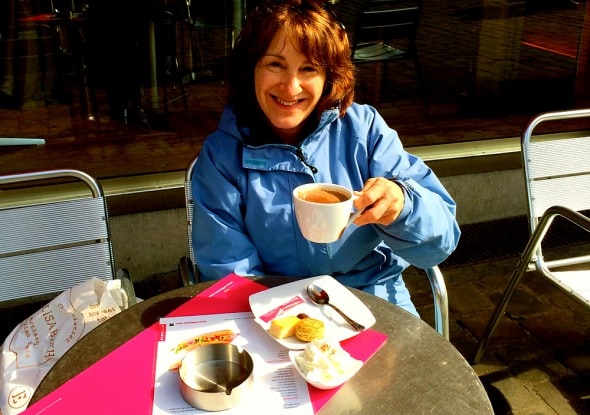