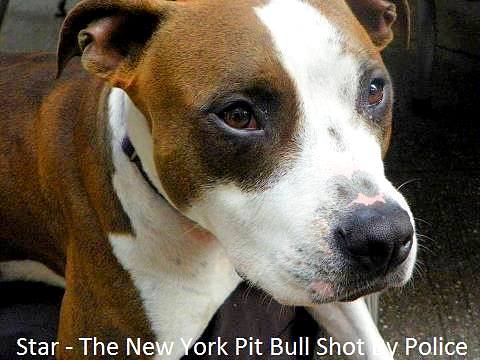 You may remember Star, the pit bull who was tragically gunned down in 2012 by the NYPD as her homeless human lay on the sidewalk, seizing.  Amazingly, she survived, and likely because of the persistence of a very dedicated former New Yorker who was determined to keep her alive and give her a new home.  Their story is unbelievable.

On August 13th, 2012, Polish immigrant Lech Stankiewicz collapsed on an East Village sidewalk.  His dog, Star, tried to protect him, and nipped at a woman and ran towards a police officer.  She was shot in the face, causing her to lose an eye.  It was a miracle that she lived.  But what happened next is even more harrowing.

Ben Yakas of the Gothamist sat down for an interview with Cifarelli, and we are featuring it here: 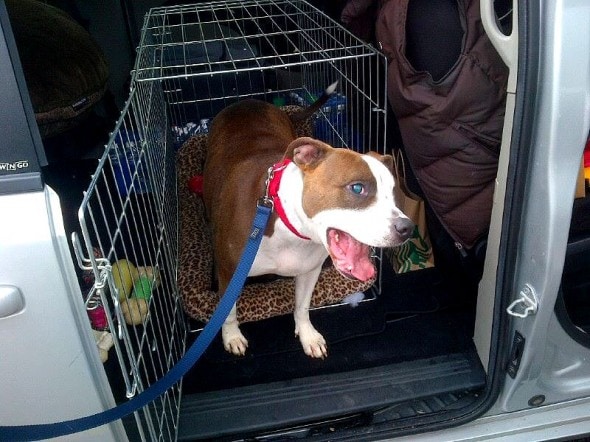 You started the Facebook page pretty soon after the incident came out, right? What was it about Star’s story that moved you so much?

I’m a New York guy living in Nebraska for 20 years, and I can’t stay off Gothamist. I can’t stay off the Daily News and the New York Post because I’m addicted to that stuff, what goes on in New York. And I saw the video that you guys posted, and it just floored me, man. A rush of emotions came out of me, and it was like, I can’t believe this could happen.

First of all, after living in Nebraska, I’ve gotten a little bit more sane. And I worked at the Department of Corrections for many years. I became a prison official in Nebraska, and we dealt with some of the worst convicts who made homemade knives, and we just didn’t shoot people right away. So in my mind, when I watched your video, I said to myself, number one: that officer should definitely have taken care of crowd control. And number two: I just felt as though it was an overreaction to what had happened. And I thought, ‘My god, what would have happened if they missed the dog while moving?’ I’m an expert on weapons. That was a lucky shot. That bullet could have hit Lech in the head. I was so profoundly affected by it that I started the Facebook page, but actually I wanted to help Lech.

You’re talking to a man who worked in the Department of Correction, even death row. This was the most profound thing that ever got me, because it had every situation there. It had homeless, it had somebody with a medical episode, it had the NYPD, it had a dog, it had suffering, and it had the NYPD spokesperson originally saying the dog had died. But yet, you guys updated and said the dog was clinging to life. This story to me has been the greatest thing that’s ever happened in my life, because it made me as a 47-year-old guy at the time believe in miracles. The fact alone that Star survived the shooting! I have her medical records, you should see the amount of bullet fragments she had in her head. The doctors said, “If you could read medical records, you wouldn’t believe this dog is alive.” 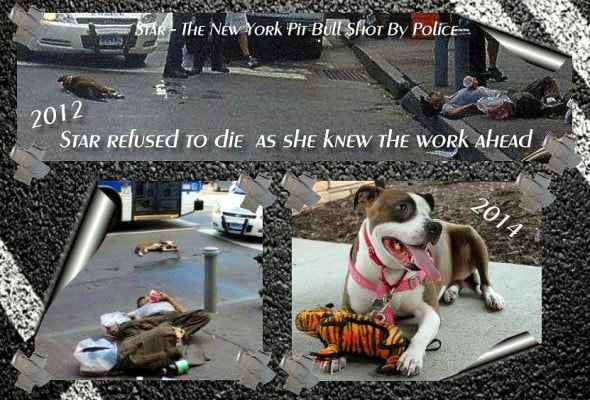 How did you end up adopting Star?

Everybody thought the dog died initially. I called up the NYC AC&C from my office in Lincoln, NE and talked to the administrator there. I talked to her about recycling, and didn’t talk about the dog. And finally I asked her, “Hey um, what happened with that dog that was shot in the head?” She said to me, “You’re gonna have to give me an ID number.” I said, “That dog, Star.” And she starts punching into the computer and says, “Oh, the dog is at the Manhattan vet, clinging on for life.”

I called the Manhattan vet and got as much information as I could, but by that time I couldn’t get any further. I went on my LinkedIn profile. I connected with [AC&C Director] Richard Gentles, and basically told him through LinkedIn that I know the dog is alive, and that it better get good care. Shortly thereafter they hid the dog. They had The Lexus Project and Mayor’s Alliance take ownership of the dog. They were scared about paparazzi on the dog, so they stuck her in the National Greyhound Adoption Program in Pennsylvania, which is where I found the dog.

I kept calling up places saying, “Look, do you have a pit bull missing an eye?” And finally a place said yes. She had a different name then; they called her Shiloh. But it was enough for me at that point. I found out who the owner of the National Greyhound Adoption Program was, David Wolf.  I called, left a message, and David, a very nice man, called me back. I said, “David, are you known as a liar?” He said, “No, I take offense to that.” I said, “I’m gonna ask you a question: do you have Star, the New York pitbull?” He says, “I can’t confirm or deny that.” So I knew that he had her, and I said, “Look, I’m coming from Nebraska, I want to come see the dog.” He goes, “Wait a minute, I can’t let you do that! I gotta call the Mayor’s Alliance, I gotta find out if that can even happen.”

They had the dog hidden. It took me a lot of luck to find the dog, but I finally found her. But I could not tell, I had an agreement, I could not tell anybody where the dog was.  But here’s the other thing: Star was so horrifically injured that David Wolf didn’t even think she’d make it because she had a case of MRSA when she left the Manhattan vet, and he got her about three weeks after she was shot. He told me, “Charlie, it was touch and go.” And even when I visited her in December [2012], her equilibrium was off, her hearing wasn’t that good. She was just a dog that definitely had special needs.  But I stayed on the case, and finally, I convinced the authorities in April 2013:  “Let me come from Nebraska, pick up Star, and give her a forever home,” and the rest is history, she became my dog. The dog is such a nice dog.

Why do you think the city hid Star away?

I think that it was a very odd situation for them, it wasn’t really clear cut. Star didn’t bite anybody at the time. It was a situation that became a three ring circus. I think they wanted it to go away. You know, August 2012—as a former New Yorker, I watched the news—a lot of bad things happened. They shot nine innocent people in front of the Empire State Building by mistake when they were going after that guy. They also shot that homeless guy who was a little mentally deranged holding a knife in front of Times Square in front of Bubba Gump’s. And then they shoot a homeless man’s dog in the head, a homeless man that had a seizure?

I just think that they wanted this situation to go away, and it was probably the easiest thing to do—kinda let it just float out the back door. I just couldn’t let go of this situation, I just never felt so compelled in my life, this is so out of my comfort zone, man. I would’ve lived my life in obscurity in Nebraska if it wasn’t for this dog.

Did you ever talk to Lech?

Yes. A place called Collide in New York City helps the homeless correspond with me, and I emailed them about Lech. Lech thanked me for my helping hand, but he said it was unrealistic for him to keep the dog. He basically wanted to go back to Poland and start his life over. He just was done here.

Lech did not want any help, and Lech’s friend had reached out to me. He’s a private guy who just wanted his anonymity after this. Being filmed for 10 minutes laying on the sidewalk was not a good outcome for him. And people were very divided. He had people who were very for Lech and felt compassion, such as myself. Others felt he was an irresponsible dog owner.

Has she had any lingering trauma because of what happened?

She’s a happy dog, and that’s why I made that short video. And people always ask me, ’Is she happy?’ So I just asked her. I literally just asked her that, it was spontaneous.

But one thing: if I would lay on the floor, she thinks I’m not okay, that gets her anxiety up.

Because of what happened with Lech. Yeah. It took me a few months to realize the issue with that. I get off the couch one night watching TV. My back kinda got a little soft, and I wanted to lay on the flat floor, and I could see she was checking me out with her nose. She was fired up seeing if I was okay.

But other than that, she is unbelievable. You pet her, and the first thing she does is she rolls on her back. There’s an event that was probably a year ago, and I took her to the dog adoption days, and the volunteers started hugging her or petting her, and the next thing I know, she’s on her back and she’s getting hugs.

I’ve had some accomplishments in life, man. And it’s not about the four-car garage. It’s not about the gold watch. She’s really changed my priorities as to what’s important. And I’ll tell you something, I tell kids all the time, man: if you believe in something, don’t have an off button, and you can get it done. 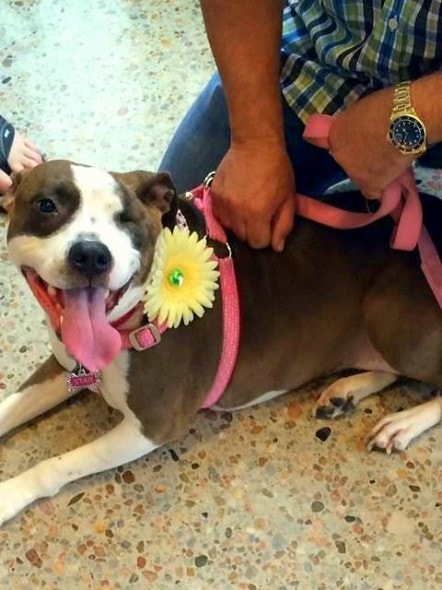