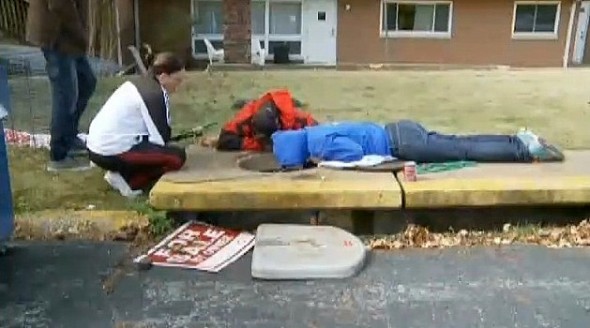 When animal control claimed there was nothing they could do about a dog stuck in the sewer, residents in a St. Louis area took action and made sure that the dog was finally brought back to the surface after spending four days trapped underground.

Neighbors north of St. Louis say they heard a dog’s cries coming from the sewer for days. A man abandoned his two pit bulls when he moved, and they likely turned to a storm sewer in search of food.

“Since Saturday, one of the workers saw – two dogs, actually – ran into the hole, and fell in, and one of them actually got right out, but the other one never came out,” said Vivian Dudley.

Animal control was called, but their response was lackluster.

“They said, ‘well, there’s nothing we can do, we’ll just put a trap here,'” said neighbor Mary Greenwell. “And when we came back up and saw the trap we said, ‘No, we’re gonna have to do something.'”

Animal control believed the dog could come and go at will, and that rescue efforts would just scare him into retreating farther into the sewer. Neighbors were not satisfied with that response. 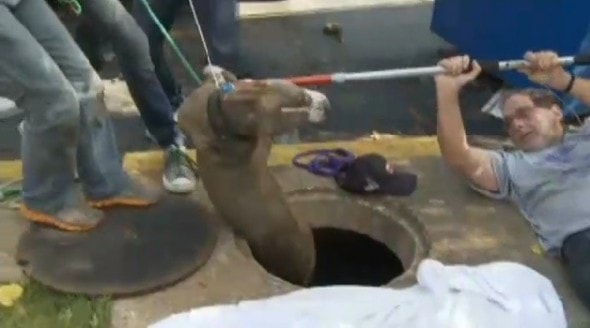 “So we’ve just been feeding him every day because we couldn’t get him out,” Dudley said.

So they took to the internet, and found a rescue organization that was willing to help. Stray Rescue of St. Louis arrived with some volunteers and got to work. They coaxed him close enough to loop a catch pole around his neck to pull him up – something animal control could have done, had they spent more than two minutes there to help.

“We were able to just get him to come out far enough to give him the little sleepy drugs and that’s kind of it,” said Donna Lochmann with Stray Rescue.

The dog cried as he was being pulled up – a catch pole is no doubt uncomfortable – but his wagging tail gave away his relief and gratitude.

“When he comes out and he’s wagging his tail, he’ll be fine. He’s just scared,” Lochmann said. “So we’ll take him back to our shelter and put him in a room where he can chill out a little bit and give him a couple of days to just chill, and I think he’ll be fine.”