On April 1, 2014, an earthquake of magnitude-8.2 struck Iquique, Chile and among the hurt was a dog. The canine was trapped in the rubble of a collapsed building.

Even though the quake was a powerful one, the overall damages caused were minimal. A total of seven casualties were the only ones reported. 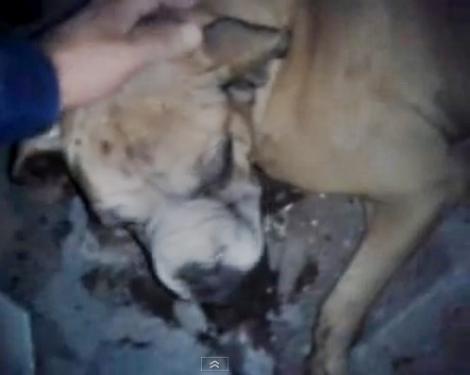 Right after the quake took place, neighbors found the trapped dog and they jumped into action to help the animal. The rescue was captured on video and for 7 min. you see Diego Vasquez, Francisco Vasquez, and Bruno Ceballos working tirelessly to free the canine form his entrapment.

At first it wasn’t clear if the dog was hurt. Half of his body was buried under the rubble and the men needed to dig to free the patient dog.

The four-legged victim never showed any signs of aggression towards his rescuers. He allowed the men to pet him and appeared happy to have them there trying to free him.

Once the dog was free, the men learned that one of his back paws had been hurt. Most of the dog’s toes were severed in the earthquake and the dog was bleeding, but fortunately the canine was able to walk on his own.

The men place the canine on a blanket and hoisted him out of the rubble.

It appears that one of the men in the video is the owner of the dog. You can hear a voice saying “we thought we had lost him in the earthquake, but the boys heard him and that is how we found him.”

Later that same voice talks about bandaging the leg and going out to look for medical help for the pet.

We are glad these men showed so much compassion for an injured animal amid the traumatic and devastating earthquake. We hope the pet did receive the medical assistance he needed, and we find peace in knowing that his owner was among those that helped rescue him.